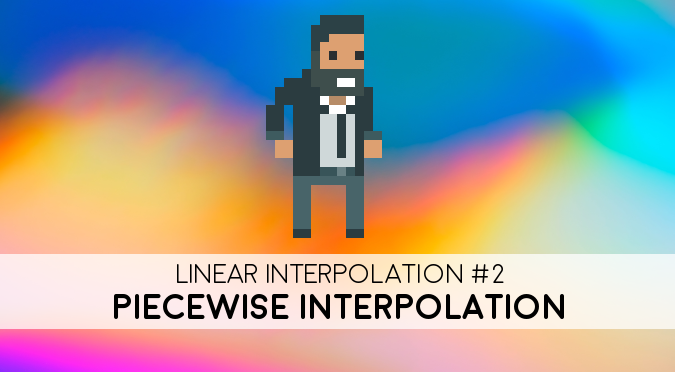 In the first part of this series, we introduced a mathematical technique known as linear interpolation—lerp for short—which can be rather handy for game developers and programmers in general. From “blending” colours to “moving” between points, lerp is a very well known and loved tool that is present—in one form or another—in virtually all libraries and engines.

In its most basic form, lerp takes a number from

and remaps it onto a different interval

. The opposite is also possible, and it is sometimes called inverse lerp. However, we can generalise linear interpolation so that it remaps a number

to an arbitrary interval

. Some libraries, such as Arduino, calls this map, but in this tutorial we will keep call referencing it a a more generalised version of lerp.

The lerping equation is also rather simple:

and has a very well known geometrical interpretation. The original interval

is first shifted back, so that

. It is then rescaled to

, and the same process repeat in reverse to stretch it and shift it back to

Equation (1) easily translates to the following function, giving us an easy and efficient way to lerp between numbers from any two arbitrary intervals:

One of linear interpolation’s biggest strength—its simplicity—is also one of its worst limitations. As the name suggest, lerp can only be used to link two objects with a linear relationship. Geometrically, this means that lerp can only represents linear functions.

The diagram below shows how lerping from

, really means deriving the equation of the line passing from

This becomes apparent if you move an object lerping between its start and target positions. Because the movement is movement is linear, the object will start and stop moving very suddenly, resulting in a non-realistic behaviour.

Ones easy way to fix this is to use the so-called easing curves of functions. Those are mathematical functions that takes a number between

and typically produce another number between

; this gives a way to plug in one of those functions inside our lerp equation, so tweak its overall behaviour.

Easing curves are very popular in UX and web design, where they can be used to create smooth and reactive movements.

The table below, from 1ucasvb’s lab, shows some common ones, and the overall effect they have on lerp:

Thanks to easing curves, linear interpolation can be used to create some more nuanced movements. However, this does not solve all of the problems that we might encounter, or the many problems that lerp can solve.

Linear interpolation only models a single line. But it is possible to approximate any arbitrary curve with a series of linear segments. The diagram below shows a curve (solid grey) being approximated with four segments. Each segment is linear, meaning that by using lerp on four different segments we can have a rough approximation of the original curve:

Piecewise interpolation can be a good way to approximate non-linear functions that would otherwise be impossible to model with lerp alone. This has many applications. For instance, it can be used to replace a very expensive function with a relatively inexpensive linear approximation. All that is needed is to sample the value of the function at some points

, and to get its values

. Linear interpolation will do the rest.

Let’s imagine that we have a function F that we want to approximate with piecewise interpolation. What we need is to store the values at which the function was sampled (float[] Xs) and its results (float[] Ys). The snipped below samples the function F every xStep, in the interval between xMin and xMax:

The arrays Xs and Ys is really all we need to perform piecewise interpolation.

Additionally, nothing stops us from using intervals of different lengths on the X axis. This means that if such an uniform sampling is underperforming in certain parts of the function, we can increase its precision where needed and use fewer points where the function is relatively well behaved.

Once Xs and Ys are available, performing piecewise interpolation means taking an arbitrary value x and finding in which segment it is contained. This means finding the index inside the array so that Xs[index-1] <= Xs[index].

There are countless way to do this. The naïve one is to loop through Xs, stopping when x > Xs[index]. However, it is not the most efficient way; in fact, it can potentially loop through the entire array. When there is the risk that an algorithm will loop through the entire length of an array to perform its task, it is said that it has a liner complexity. The Big O notation is often used to summarise this:

However, we can take advantage of the fact that the values inside Xs are sorted. After all, when you are searching for a word in a dictionary, you do not leaf through the pages starting from the cover! An efficient approach to find an value inside an array is to use the so-called binary search. In a nutshell, at every step it splits the array into two parts, and focuses on the one that should contain the value:

With every new iteration, binary search reduces the search space in half. If the value is not present in the array, it will continue to subdivide until it reaches a single element. The number of steps is, therefore, logarithmic in the length of the array. This is because

represents the number of times you need to divide

. For this reason, we can say that the binary search algorithm has logarithmic complexity; or

in the Big O notation.

Luckily for us, C# has a good implementation of the binary search algorithm: Array.BinarySearch:

The returned index is the exact position in the array Xs where the value x was found. If not found, the method returns a negative number which, according to the official .NET documentation:

If value is not found and value is less than one or more elements in array, the negative number returned is the bitwise complement of the index of the first element that is larger than value.

If value is not found and value is greater than all elements in array, the negative number returned is the bitwise complement of (the index of the last element plus 1).

This allows us to design a simple function to finally perform piecewise interpolation:

There is another vey useful case for the piecewise linear interpolations: inverting functions. Let’s imagine a function

) is a function so that

Inverting a function is highly non-trivial and computationally expensive. Not all functions admit an inverse, while some are not in a closed-form (meaning that they cannot be calculated with a finite number of “standard” operations).

Geometrically speaking, however, inverting a functions is easy. All we need to do is to flip the X and Y axes! For this reason, if Lerp(Xs, Ys, x) is the piecewise approximation for

, Lerp(Ys, Xs, y) is the piecewise approximation for

. And this allows to invert functions for free!

In all fairness, things are a bit more complicated. In fact, for this to work it is necessary that even the produced Ys are sorted. If not, function cannot be inverted as there would be multiple possible answers for a single value.

One very interesting applications of piecewise linear interpolation is the creation of colour gradients. The original code presented above was designed for floats, so a few small changes are required:

In the code above, the array of floats has been replaced with an array of Colors.

Now, it is easy to create a hue gradient just with an array of colours and their positions:

The third and final part of this series will show how piecewise linear interpolation can be used to correct colour curves and gradients.