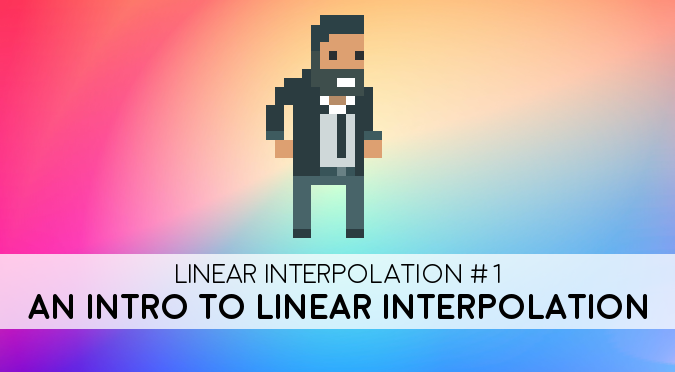 One of the most useful—and somewhat underrated—functions in Game Development is lerp. Shorthand for linear interpolation, you can imagine lerp as a way to “blend” or “move” between two objects, such as points, colours and even angles.

Virtually every software comes with a function to perform linear interpolation. Unity, for instance, has several; the most well-known being being Mathf.Lerp. It takes two numbers, namely

, and lerp them using another numbers

which value must be between

The result is simple: when

, the result is the average between the two,

In a nutshell, the parameter

allows to move in the range between

. Mathematically, we can say that lerp is a function that maps the interval

, and it can be expressed using the following equation:

This equation might seem confusing at first, but it has a very simple geometrical interpretation, as seen in the diagram below. The value of

can range anywhere from

, it will range between

: exactly the size of the desired interval. Then, all that is needed is to shift it accordingly by

Some libraries also feature a complementary function; Mathf.InverseLerp, in case of Unity. As the name suggests, inverse lerp does exactly the opposite of what lerp does: it remaps a number in the interval

A degenerate case can occur when

, as that would lead to a division by zero. In that case, it is not uncommon to assume

Even (2) can be interpreted geometrically. In this case, the exact same operations of lerp are preformed, but in reverse:

With these two functions, it is possible to remap any arbitrary value

to any other integer interval

which, once again, has a very immediate geometrical interpretation:

📚 An alternative derivation
The equation for the complete linear interpolation, (3), can also be derived in a more algebraic way.

What linear interpolation does, is to keep the proportion between

equal to the proportion between

. We can imagine the two intervals as “loading bars”, and

the two cursors that indicate which percentage of the loading is done. Given

, linear interpolation asks to find the value of

so that both “loading bars” are showing the same percentage.

This “percentage” is calculating dividing the “current loading” by the “total loading”. And ensuring that both quantities are set to be equal for both intervals:

, yields the expression previously described in (3).

Some libraries wrap those two functions into one; Arduino, for instance, calls this map. No equivalent function is present in Unity, but it can be easily implemented like this:

Linear interpolation is indeed linear because it creates a linear relationships between between the input and output intervals. If we look at lerp as a mathematical function plotted in the cartesian plane (below), it is easy to see that it represents the equation of a line that passes between

So far, we only interpolated two numbers. But nothing stops us from interpolating two points. In this case, the easiest way to do so is to interpolate the individual X and Y coordinate:

Unity comes with both Vector2.Lerp and Vector3.Lerp which, as expected, allow to interpolate between points in 2D and 3D. Lerping between points, regardless of their dimension, is equivalent to moving along the line that connected them.

While lerp is inherently linear, it can actually be used to create curves. Successive interpolations on a series of points results in a family of shapes known as Bézier curves (pronounced: /ˈbɛz.i.eɪ/, BEH-zee-ay).

The Ever so Lovely Bézier Curve by Shader Witch Freya Holmér is possibly the most accessible article on the topic (and the source of the animation above).

Another very common way in which lerp is used is to blend colours. Conceptually, you can imagine lerping between colours as mixing different amounts of paint. Lerping between red and blue with

That is exactly how Color.Lerp works in Unity. While this technically works, it often yields rather poor results. This is because the RGB colour space is good to store colours, but not so much to manipulate them in a way that makes sense, perceptually.

Learning how to properly interpolate between colours is a dark art, which is heavily discussed in The Secrets of Colour Interpolation. You can play with the swatches below to see for yourself what difference it makes to lerp between different colour spaces.

The last aspect that this first post is going to discuss, is about angles and rotations. From what we covered so far, one might be tempted to lerp between angles in order to perform rotations. That is actually not going to work; or at least, not always, and not as you expect.

The reason is that angles are “looping”, and being able to take that into account requires a non-linear operator. Let’s make a simple example: lerping between 90° and 180° should work as intended, giving you a nice angle that goes from 90 to 180. However, lerping from 350° to 10° will not! There are two ways to reach 10 from 350: going up, or going down. The linear interpolation does not know that it is working with angles, and it will take the longer path, decreasing the angle from 350 to 10.

One way to fix this is to use quaternions instead. Quaternions are an alternative—and somewhat safer—way or representing and working with angles in 3D. But they are also incredibly counterintuitive and difficult to grasp.

Unity comes with its own way to lerp between quaternions, called Quaternion.Slerp. The term slerp stands for spherical linear interpolation. In a nutshell, slerp allows to lerp between any two points on a sphere, rather than a flat plane. A future series will delve into the absolute madness that are quaternions; luckily for you, this is not that series.

The second part of this series will see how the linear interpolation can be extended to non-linear functions.