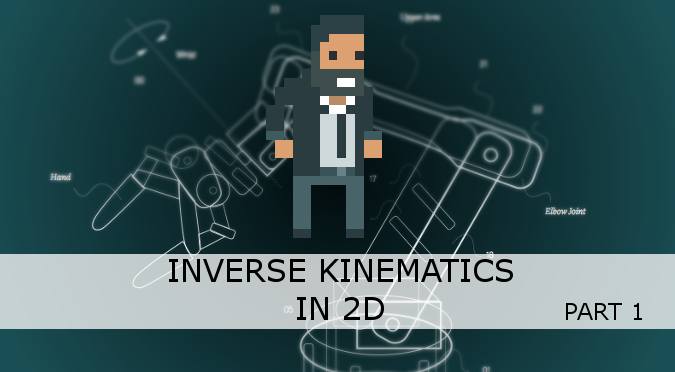 If you have been following this blog for a while, you might have noticed some recurring themes. Inverse Kinematics is definitely one them, and I have dedicated an entire series on how to apply it to robotic arms and tentacles. If you have not read them, do not fear: this new series will be self-contained, as it reviews the problem of Inverse Kinematics from a new perspective.

We are so used to interact with the world around us that is easy to underestimate how complex moving our hands and arms really is. In the academic literature, the task of controlling a robotic arm is known as inverse kinematics. Kinematics stands for movements, and inverse refers to the fact that we don’t usually control the arm itself. What we control are the motors that rotate each individual joint. Inverse kinematics is the task of deciding how to drive these motors to move the arm to a certain point of position. And in its general form, it is an exceptionally challenging task. To give a feeling for how challenging it is, you can think about games such as QWOP, GIRP or even Lunar Lander, where you do not decide where to go, but which muscles (or thrusters) to activate.

The task of controlling moving actuators predates even the field of robotics. It should not come as a surprise that, throughout the centuries, mathematicians and engineers have been developing countless solutions. Most 3D modelling softwares and game engines (including Unity) come with a set of tools that allow the rigging of human-like and dog-like creatures. For all different setups (such as robotic arms, tails, tentacles, wings, …) no built-in solution is usually offered.

This is why in the previous series on Procedural Animations and Inverse Kinematics, I have introduced a very general and effective solution that works on potentially any setup. But such a power comes at a cost: efficiency. One of the main criticism that the series has received is that it was too time-consuming and expensive to be used on hundreds of characters at the same time. This is why I have decided to start a new series that is specifically focused on Inverse Kinematics for arms with two degrees of freedom. The technique you will discover in this tutorial is exceptionally efficient and can truly be run on dozens (if not hundreds!) of characters at the same time. 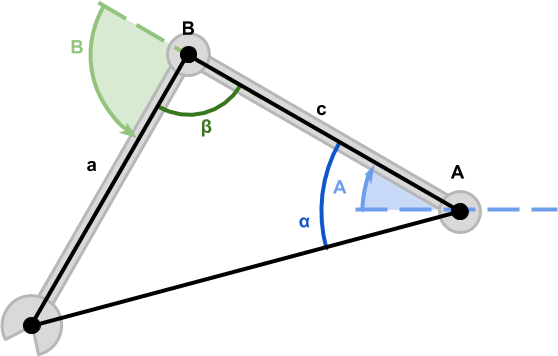 Let’s start by formalising the problem a little bit more. The two joints,

(both in black), can be rotated by

(in green) degrees, respectively. This cause the end effector to move to a position

We can use the three points

to construct a triangle with internal angles 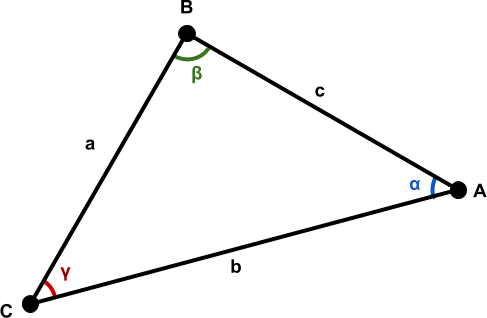 While these three angles are unknown, we know the length of all edges.

Knowing the three sides of a triangle is enough to find all of its angles. This is possible thanks to the law of cosines, a generalisation of Pythagora’s theorem for triangles that are not necessarily at right angles.

, which can be calculated using the law of cosines on

We can refector (1) to extract

What is now needed is to use the inverse cosine function

(also known as arcosine) to find the

With the same procedure, we can apply the law of cosine once again to find

❓ Show me the derivation for the law of cosines! 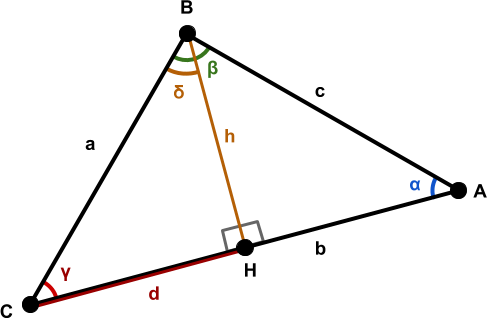 . This proof is a natural consequence of applying Pythagora’s theorem to both triangles:

. We can equate them to obtain:

which can be rearrenged as:

Equation  (6) is how the Law of cosines was transcribed in Euclid’s Proposition 12 from Book 2 of the Elements.

To get to the modern form of the equation, we need to apply some trigonometry. Since (5) is a right triangle, we can express the segment

The last step is a consequence of the well-known co-function identity which states that:

in (6), which gives us the modern form of the law of cosines:

Using the law of cosines we have calculated the values for

, which are the internal angles of the triangle created by the robotic arm. However, the angles we really need are

, which is easier. It is obvious from the diagram above that

radians). This means that:

is not much different. The only different here is that we need to take into account

(in purple), which is the angle of the segment

. This can be calculated using the arcotangent function

is mostly arbitrary and depends on the way each joint move.

❓ Multiple solutions?
The problem of inverse kinematics typically admits several solutions. Even in this case with only two degrees of freedom, we have two distinct solutions. 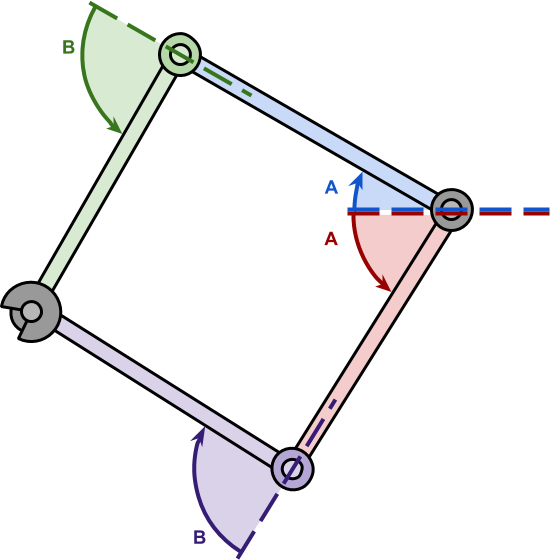 are indeed different, the derivation remains essentially the same with the only exception of  (13) and (11).

This post concludes the introduction on the Mathematics of Inverse Kinematics for robotic arms with two degrees of freedom.

The next post will explore how we can use the equations derived to efficiently move a robotic arm in Unity.

The line art animals that have been featured in this tutorial have been inspired by the work of WithOneLine.