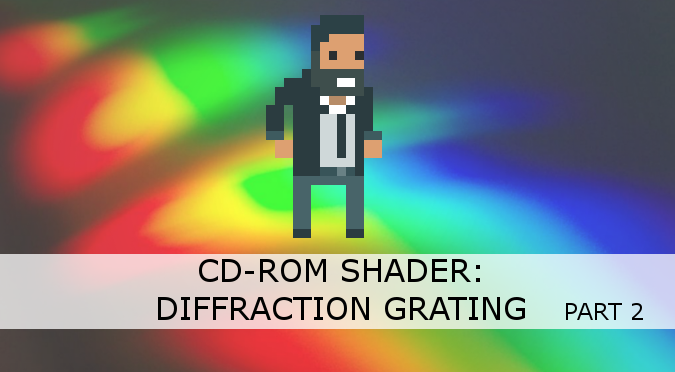 This post completes the series on how to create a shader for CD-ROMs.

In the first part of this tutorial, we have created a first approximation for the iridescent reflections that CD-ROMs exhibit. It’s important to remember that this shader is physically based. To correctly simulate the reflection we want, we need to make sure that the tracks on our CD-ROM are arranged in a circular way. This will ensure a radial reflection.

The grating equation that we have derived in The Mathematics of Diffraction Grating has a big limitation: it assumes that the slits are all aligned in the same direction. While this is often the case with insects’ exoskeletons, the bands on the surface of a CD-ROM are arranged in a circular pattern. If we naively implement the solution presented in the section above, we will obtain a rather disappointing reflection (below, right). 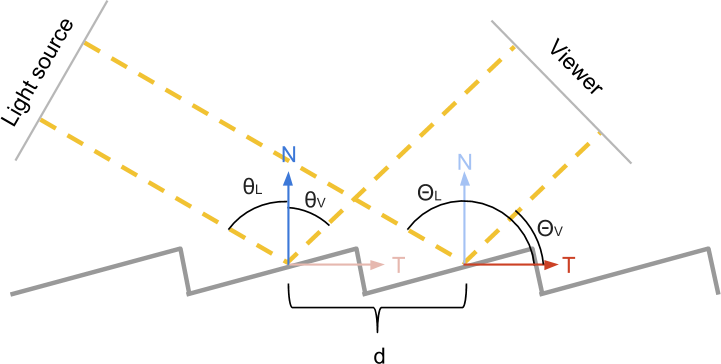 In the diagram above, the normal direction

is in blue and the tangent direction

in red. The angles the light source and viewer make with the normal direction

, respectively. The analogous angles with respect to

. As stated before, using

for our calculations will result in a “flat” reflection, since all slits share the same

instead since they correctly capture the local orientation.

So far, we know that:

are orthogonal, the following property holds:

That is very convenient also because Cg offers a native implementation of the dot product. What’s left now is to calculate

❓ Where does the cosine come from?
All the vectors discussed share a common property: they have a length of 1. For this reason, they are also called unit vectors. A basic operation that can be applied to unit vectors is the dot product.

This is where the cosine in the equations above comes from.

To complete our shader, we need to calculate the tangent vector

. Normally, this could be provided directly in the mesh vertices. However, given how simple the surface of a CD-ROM is, we can calculate it directly. Please, keep in mind that the approach presented in this tutorial is rather simple and will only work under the assumption that the surface of your CD-ROM mesh is correctly UV-mapped. 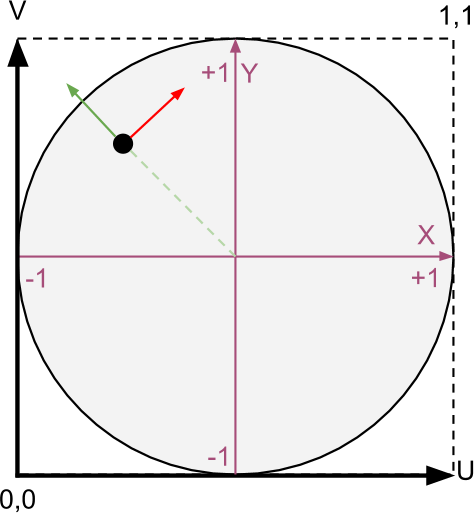 The diagram above shows how the tangent directions are calculated. The underlying assumption is that the surface of the disk is UV mapped like a quad, with coordinates ranging from (0,0) to (1,1). Once that is known, each point on the CD-ROM surface is remapped onto (-1,-1) to (+1,+1). With this change of the frame of reference, we have that the new coordinate of a point also corresponds with its direction away from the centre (green arrow). We can rotate that direction 90 degrees to find a vector that is tangent to concentric tracks of the CD-ROM (in red). 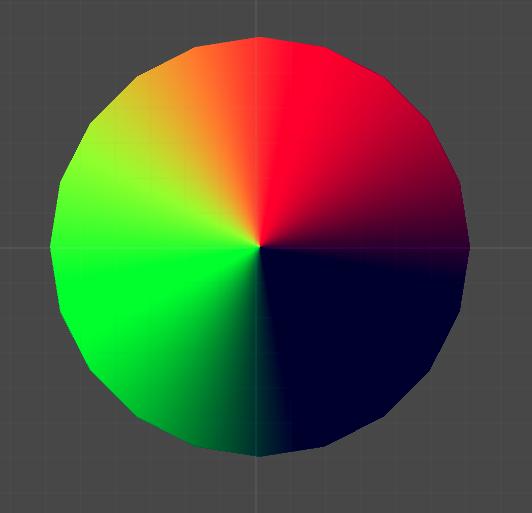 These operations need to be done in the surf function of the shader since the UV coordinates are not available in the lighting function LightingDiffraction.


What’s left now is to convert the calculated tangent from object space to world space. The conversion will take into account the object translation, rotation and scale.

If you are unfamiliar with shaders, there is a very simple way to pass additional parameters. Simply add them as variables in the body of the shader. In this case, we can use a shared variable float3 worldTangent; which is initialised by surf and used by LightingDiffraction.

❓ How to switch between coordinate spaces?
Coordinates are not absolute. They are always dependent on a reference point. Depending on what we are doing, it might be more convenient to store vectors in a particular coordinate space instead of another.

In the context of shaders, it is possible to change the coordinate spaces of a point simply by multiplying it with a special matrix. The one that allows converting coordinates expressed in object space in world space is unity_ObjectToWorld. If you are using an old version of Unity, that constant will be called _Object2World instead.

We now have all we need to calculate the colour contribution of the iridescence reflection:


❓ How this relates to the rainbow?
The variable wavelength declared in the for loop contains the wavelengths of light that contribute to the iridescent reflection of the current pixel.

The post Improving the Rainbow shows how each wavelength can be converted to its respective colours. The function used for this project is spectral_zucconi6, which is an optimised version of the solution presented in the GPU Gems shader book.