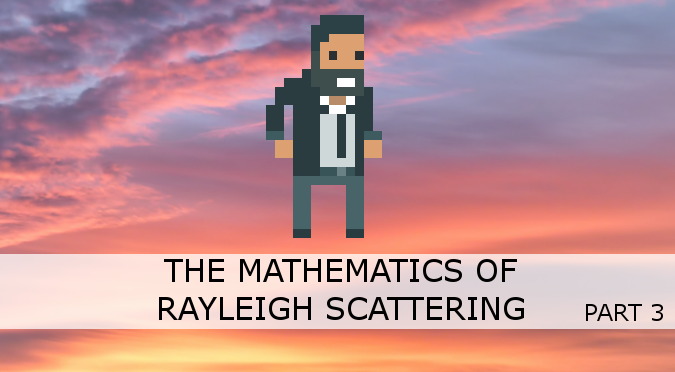 This post introduces the Mathematics of Rayleigh Scattering, which is the optical phenomenon that causes the sky to appear blue. The equations derived in this tutorial will be translated into shader code in the next tutorial.

In the previous tutorial, we have derived an equation that provides a good framework to approximate atmospheric scattering in a shader. What we have omitted, however, is the fact that a single equation will not yield believable results. If we want an atmospheric shader that looks good, we have to step up our Maths.

The interaction between light and matter is extremely complex, and there is no easy way to fully describe it. Modelling atmospheric scattering is, in fact, exceptionally difficult. Part of the problem comes from the fact that the atmosphere is not a homogeneous medium. Both its density and composition change significantly as a function of the altitude, making it virtually impossible to come up with a “perfect” model.

This is why the scientific literature presents several models of scattering, each one designed to describe a subset of optical phenomena occurring under specific conditions. Most optical effects that planets exhibit can be reproduced by taking into consideration two different models: Rayleigh scattering and Mie scattering. Those two mathematical tools allow predicting how light scatters on objects of different size. The former models how light is reflected by the oxygen and nitrogen molecules that make up most of the air. The latter, models how light reflects on much larger compounds that are suspended in the lower atmosphere, such as pollen, dust and pollutants.

Rayleigh scattering causes the sky to be blue, and sunsets to be red. Mie scattering gives clouds their white colour. If you want to understand how, we’ll have to delve deeper into the mathematics of scattering.

What is the fate of a photon that hits a particle? To answer this question, we first need to redefine it in a more formal way. Let’s imagine a ray of light travelling through empty space, suddenly colliding with a particle. The outcome of such a collision varies dramatically depending on the size of the particle and the colour of the light. If the particle is small enough (such as atoms and molecules) the behaviour of the light is best predicted by the Rayleigh scattering.

What happens is that a part of the light continues its journey unaffected. However, a small percentage of that original light interact with the particle and get scattered in all directions. Not all directions, however, receive an equal amount of light. Photons are more likely to pass straight through the particle or to bounce back. Conversely, the less likely outcome for a photon is being deflected by 90 degrees. Such a behaviour can be seen in the diagram below. The blue line shows the preferred directions for the scattered light. 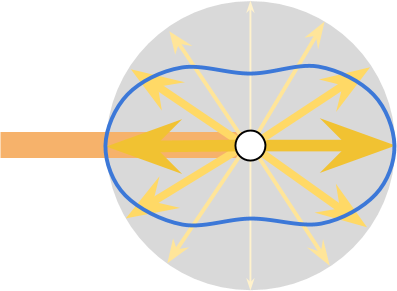 This optical phenomenon is described mathematically by the Rayleigh scattering equation

, which tells the ratio of the original light

that is scattered towards the direction

The equation used in this tutorial comes from the scientific paper Display of The Earth Taking into Account Atmospheric Scattering, by Nishita et al..

❓ Where does this function come from?
One of the missions of this blog is to provide a derivation of all the quantities introduced. Unfortunately, this will not be the case for the equations that govern the Rayleigh scattering.

If you are still curious to understand why light particles reflect in such a bizarre way onto air molecules, the following explanation might give you an intuition into what’s really going on.

Rayleigh scattering is not really caused by light “bouncing off” particles. Light is an electromagnetic wave, and it can interact with the charge imbalances that are naturally present in certain molecules. Those charges become excited by the absorption of the incoming electromagnetic radiation, which is later re-emitted. The two-lobed shape you see in the phase function shows that air molecules become electric dipoles, radiating like exactly like microscopic antennas.

The first thing we have noticed about the Rayleigh scattering is that certain directions receive more light than others. The second important aspect is that the amount of light scattered is strongly dependent on the wavelength

of the incoming light. The polar diagram below visualises

is often referred to as scattering at sea level.

The image below shows a rendering of the scattering coefficients for a continuous range of wavelength/colour of the visible spectrum (code available on ShaderToy). 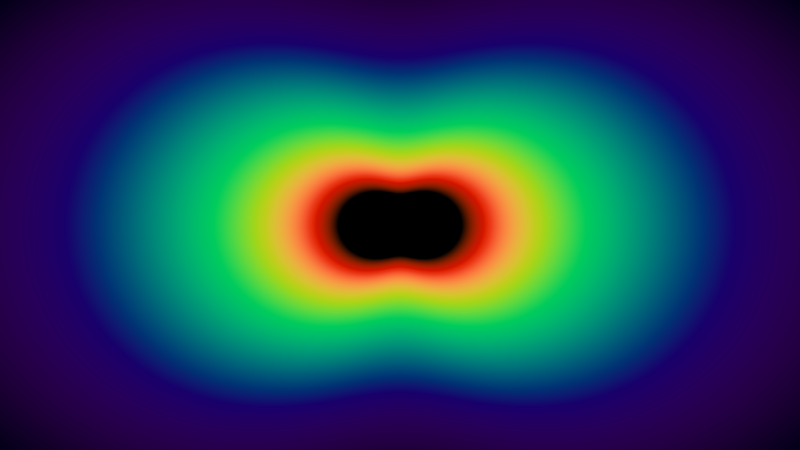 The centre of the image appears is black because wavelengths in that range are outside the visible spectrum.

The equation for the Rayleigh scattering indicates how much light is scattered towards a particular direction. It does not tell, however, how much energy is scattered in total. To calculate that, we need to take into account the energy dispersion in all directions. Such a derivation is not for the faint-hearted; if you are not comfortable with advanced Calculus, this is the result:

indicates the fraction of the energy that is lost to scattering after a collision with a single particle. This is often referred as the Rayleigh scattering coefficient.

If you have read the previous part of this tutorial, you might have guessed that

is very expensive. In the shader that we are going to write, we will try to save as much computation as possible. For this reason, it is useful to “extract” from the scattering coefficient all the factors that are constant. This leaves us with

, which is known as the Rayleigh scattering coefficient as sea level (

❓ Show me the Maths!
The equation for the Rayleigh scattering indicates the ratio of energy that is lost in a specific direction. To calculate the total loss, we need to take into account all the possible directions. A summation over a continuous interval requires an integration.

, but that would be a mistake.

Despite the fact that we have been visualising the Rayleigh scattering in two dimensions, it actually is a three-dimensional phenomenon. The scattering angle

can be any direction in a 3D space. Accounting for the total contribution of a function that depends on an angle

) is referred to as solid angle integration:

in the XY plane, while the outer integral rotates the result around the X axis to account for the third dimension. The added

is used for spherical angles.

The integration processs is only interested in what depends on

are constant, and can be moved out of the integral:

This massively simplifies the inner integral, which can now be performed:

We can now perfom the outer integration:

Which leads to the final form:

Since this is an integral that takes into account the scattering contributions in every direction, it makes sense that the expression does not depend on

This new equation provides yet another way to understand how different colours of light get scattered. The chart below shows the amount of scattering light is subjected to, as a function of its wavelength.

It is the strong relationship between the scattering coefficient

which, ultimately, turns sunset skies red. The photons that we receive from the sun are distributed across a wide range of wavelengths. What the Rayleigh scattering tells us, is that atoms and molecules from Earth’s atmosphere scatter blue light more strongly than green or red. If light is allowed to travel long for long enough, all of its blue light will be lost by scattering. This is exactly what happens at sunset, when light is travelling almost parallel to the surface.

With the same reasoning, we can understand why the sky appears blue. The light from the sun arrives with a specific direction. However, its blue component is scattered in every direction. When you are looking at the sky, blue light is coming from every direction.

The original equation that describes the Rayleigh scattering,

can be decomposed into two components. One is the scattering coefficient that we have just derived,

, which modules its intensity. The second part is related to the geometry of the scattering, and controls its direction:

can be obtained dividing

You can see that this new expression does not depend on the wavelength of the incoming light. This might seem counter-intuitive, since we definitely know that the Rayleigh scattering affects shorter wavelenghts more.

models, however, is the shape of the dipole that we have seen before. The term

serves as a normalisation factor, so that the integral over all possible angles

. More technically, one can say that the integral over

We will see in the upcoming parts how separating these two components will allow deriving more efficient equations.

If we consider the wavelengths which loosely maps to red, green and blue colours, we obtain the following results:

These results are calculate assuming

). This only happens at sea level, where the scattering coefficient is at its maximum value. Hence, it serves as a “baseline” for how much light is scattered.

metres is called the scale height.

This tutorial introduced the concept and the Mathematics of Rayleigh Scattering. In the next one, we will explain how to model Earth’s atmosphere in an effective way. For now, we will only focus on the Rayleigh scattering. The last post in this series, An Introduction to Mie Theory, will complete the shader by adding a second type of scattering.

A big thanks goes to Stephen Lavelle, who kindly helped with the derivations.