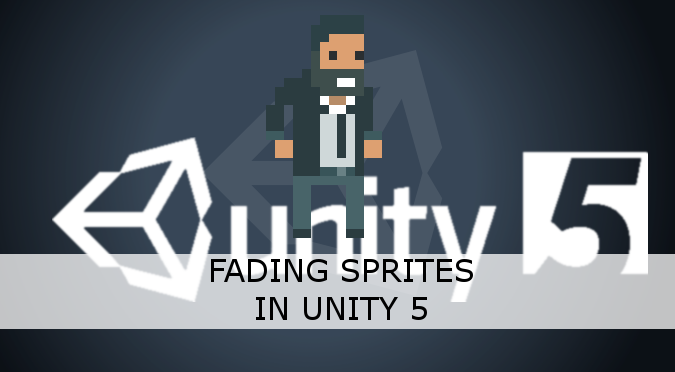 This tutorial shows how to extend the class SpriteRenderer  to support intuitive, painless fading transitions. Despite referring to sprites, this approach can be used to easily animate any property of a game object in Unity.

The link for the script used in this tutorial is at the end of the post.

One of the most important features that I feel Unity lacks, is the ability to animate sprites and material in an quick, efficient way. If you’re familiar with Unity you probably know that it comes with Mechanim, its own animation engine. However, using it to fade sprites in and out introduces too much overhead for a developer. If you want to make a sprite disappear by using Unity’s animation engine, you need to:

All of the above mentioned steps must be repeated for each animation, and it’s easy to see how tedious this can be. On top of that, Mechanim is a very powerful (and heavy) tool and I believe it’s not the right tool to use for something so simple.

The basic idea is to provide an intuitive interface that allows developer to fade sprites in the most natural possible way. It would be amazing to have a function called FadeSprite that, when invoked on a SpriteRenderer, make the sprite disappear. Something like this:


Unfortunately, the SpriteRenderer component doesn’t come with a FadeSprite method. Likely, we can add it using a feature of C# called extension methods.

We can create the above-mentioned extension by adding the following C# class anywhere in our Unity project:


The use of the keyword this in the definition of the first parameter makes the FadeSprite method an extension of the class SpriteRenderer. If everything worked, we can see that even Visual Studio now recognises FadeSprite as a valid method we can invoke on any instance of SpriteRenderer:

Note that Visual Studio clearly shows that this method was not originally defined in the SpriteRenderer class, showing (extension) before it.

❓ What are extension methods?
Extension methods are a powerful tool that C# introduces. By using this technique, you can add new methods to virtually any class in your project. Including Unity classes. Extensions methods are covered in great detail in the tutorial called Extension Methods in C#.

This tutorial explores a different approach to animation, and is based on coroutines. If you are unfamiliar with this concept: coroutines are functions that, once invoked, are executed “in parallel” to your code and can lasts for several frames. Conversely, the traditional Update and Start methods that Unity offers will be executed in a single frame.

The idea is to start a coroutine within FadeSprite. While the method we invoke terminates almost instantly, the coroutine that spawns will survive for as long as its needed. A possible implementation of this coroutine is:


The coroutine takes an additional parameter, called duration. The coroutine uses it to loop until enough time has passed. During each iteration, it alters the alpha value of the sprite, from one to zero. The WaitForEndOfFrame class allows to split the execution of this code over several frames. ❓ Are coroutines really executed in parallel?
The answer is simply no. Coroutines are not executed in parallel to the rest of the code. To be perfectly honest, none of your scripts are executed in parallel. Unity is executing them one after the other. This is very inefficient, but allows Unity to ignore possible issues that arise with concurrent accesses to shared variables.
❓ What is IEnumerator?
In Unity, only methods with return type IEnumerator can be valid coroutines. IEnumerator is an interface used in C# to indicate something that can be treated, loosely speaking, as “a list”. A coroutine is treated by Unity like a list; asking for its next element means executing the next step of the coroutine. The keyword yield is used to indicate the end of a step. Behind the curtains, C# and Unity make sure that the state of a coroutine can be interrupted and resumed, giving the illusion of a continuous execution.

The first problem we encounter, however, is that coroutines in Unity can only be started from a MonoBehaviour object. SpriteRenderer, unfortunate, isn’t a MonoBehaviour. To solve this problem, out extension method needs to receive a MonoBehaviour as a parameter, and use it to spawn a coroutine. Something like this:


This needs to be invoked in the following way:

❓ Can't we just get an instance of the class that invoked us?
The short answer is no; at least, not in any portable, efficient way. The closest we can do it to use reflection to run through the stack backward. Alternatively, .NET 4.5 introduces an attribute called [CallerMemberName] that can be used on a parameter to find the name of the method that has invoked a function. It can be used like this:

By using reflection, it is possible to find out the name of the method that has called us. Unfortunately, not even this allow us to retrieve the actual instance of the class we are interested into.

We can add some more feature to out extension method. The most useful is probably a callback. Callbacks are functions that can be passed as parameters. The idea is to pass a function that is finally invoked when the animation is completed. We can use it, for instance, to destroy the game object that we are fading out.

Callbacks in C# can be implemented using delegates. C# comes with a few delegates ready to use. One of the most common is Action<>, which represents a function with a single parameter and no return value. Perfect for our scenario.


Now we only need to invoke the callback at the end of the coroutine:

The easiest way in which we can use this, is:

Alternatively, you can also create an anonymous function and use that as a parameter:

C# also allows for a more compact syntax, which some programmers prefer:

The technique shown in this tutorial allows to easily animate any property of a game object. The toy example shown in this post referred to a SpriteRenderer, but its’ really up to you how to use it.

There are few aspects that could be improved:

You can download the script used in this tutorial from Patreon.