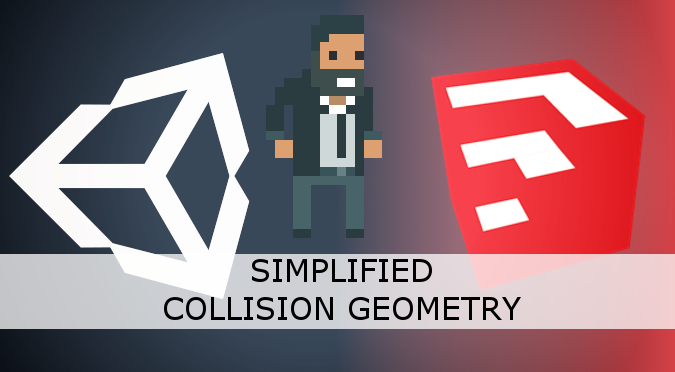 This tutorial shows how to automatically generate simplified colliders for 3D models imported into Unity. The tutorial uses Google SketchUp as an example, but its knowledge and code is agnostic to whichever modelling tool you are using.

Modern games often features very details 3D models. It is not uncommon for characters to render thousands of vertices and triangles. However, collisions with the player are often calculated on a simplified mesh. The standard player controllers Unity comes with, for instance, replies on capsule colliders. When it comes to collisions, there is often no need to be that accurate about the shape of the player. Collision between spheres, cubes, capsules and similar geometrical primitives can be performed very efficiently. Calculating and resolving collision between the individual faces of each 3D models is doable; Unity offers a special component called MeshCollider that is specifically designed for this. However, its dramatic cost rarely translates into an equally significant improvement in the overall gaming experience.

A standard approach in modern games relies on the idea that physical objects uses simplified collision meshes. This introduces an extra step in the development pipeline of a game. On top of creating 3D models, developers now also have to create collision meshes and to place them in the right position. Depending on the software you are using, this task could be massively simplified. If you are using 3D modelling tools such as Google SketchUp (Unity Manual: Importing Objects From SketchUp), unfortunately, this is not the case. SketchUp does not provide any way to distinguish between render and collision geometry. When a model is imported in Unity, you only have the option to generate a MeshCollider. 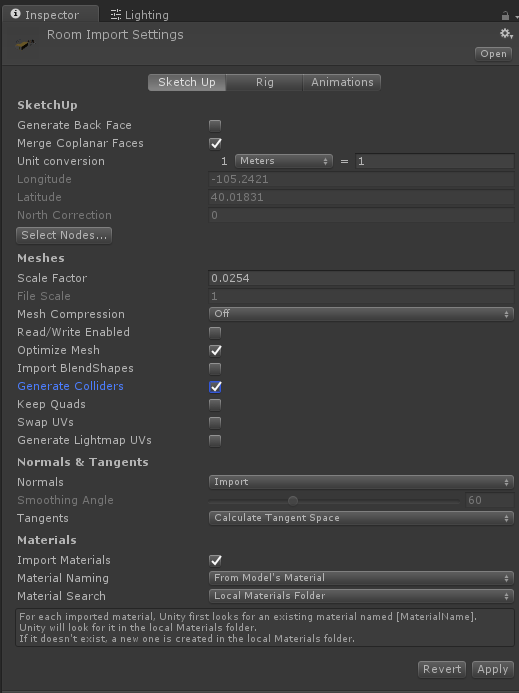 A possible approach to this problem relies on the idea that you can add, automatically, all the geometry you need. The first thing to understand is that once a model is imported from SketchUp, Unity will preserve the hierarchy of its components. SketchUp supports the concepts of groups and components; they represents containers for the actual geometrical entities (vertices and triangles) that make up your models. Both groups and components are translated into Unity as game objects. For components, the name that Unity chooses is the name used in SketchUp, plus an incremental number. If your Sketchup model contains two instances of the Table components, Unity will name them Table #1 and Table #2.

The idea behind this simple tutorial is to iterate over the imported game objects, and to add colliders only for certain specific components. Since an imported model consists of many nested game objects, we will need to iterate through all of them recursively. If you are unfamiliar with recursion, it works like this:


Adding a BoxCollider with AddComponent has the same effect of adding a collider manually from the inspector. Unity will automatically resize it to fit the bounding box of the 3D mesh. This generates a box around the object, which works in most cases.

To test CreateCollidersRecursively, we can invoke it from the Start method of a C# script.


The main issues with this approach is that the code is executed each time you start the game. There’s no reason why this couldn’t be done before starting the game, reducing its loading time. In order to do this, we need a way to execute the script in the editor, rather than in the game. This is possible by creating a custom editor script. If you are unfamiliar with this technique, Unity allows to extends the functionality and the look of its editor with custom scripts. We can use the attribute MenuItem to a function so that we can invoke it directly from the editor, before running the game.

This new setup allows us to generate colliders without damaging the final player’s experience. If you have more than one models, you can simply place them under the same game object and invoke the script on that one.


Instantiating prefabs. We can use this very technique to automatically instantiate other objects that Sketckup does not natively support. Lights, audio sources, collectibles, enemies… they can all be created in the recursive step of the function. For instance, the following snipped allows to create a light from a prefab when the name of the group matches “Light”.

This tutorial briefly covered how to recursively loop over the components of 3D model in Unity. This was used to automatically add colliders and to instantiate prefabs such as lights, audio sources and collectibles.