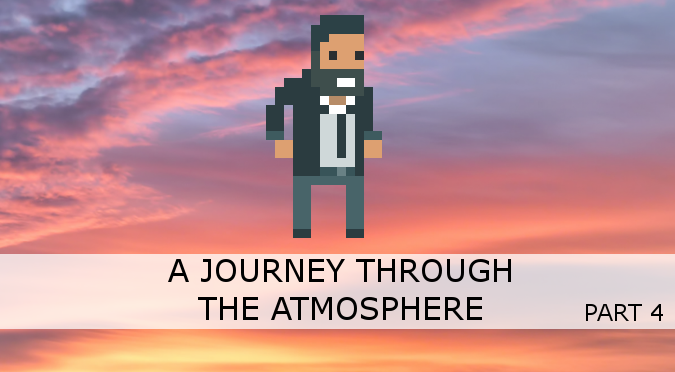 . From a logical point of view, it makes sense that the strength of the scattering is proportional to the atmospheric density. More molecules per square metre means more chances for photons to be scattered. The challenge is that the composition of the atmosphere is very complex, consisting of several layers with different pressures, densities and temperatures. Luckily enough, most of the Rayleigh scattering happens in the first 60Km of the atmosphere. Within the troposphere, the temperature decreases linearly and the pressure decreases exponentially.

The diagram below shows the relationship between density and altitude in the lower atmosphere.

represents the atmospheric measure at an altitude of

metres, normalised so that it starts at zero. In many scientific papers,

is also called the density ratio because it can be also defined as:

Dividing the actual density by

at sea level. As highlighted before, however, computing

is far from being trivial. We can approximate it with an exponential curve; some of you might in fact have recognised the density in the lower atmosphere follows an exponential decay.

If we want to approximate the density ratio with an exponential curve, we can do it like this:

is a scaling factor called scale height. For the Rayleigh scattering in the lower atmosphere of Earth, it is often assumed

metres (diagram below). For the Mie scattering, it is often around

The value used for

does not give the best approximation for

. This, however, is not really an issue. Most of the quantities presented in this tutorial are subjected to severe approximations. For best looking results, it will be much more effective to tweak the available parameters to match reference images.

In the previous parts of this tutorial, we have derived an equation that shows how to account for the out-scattering that a ray of light is subjected to after interacting with a single particle. The quantity used to model this phenomenon was called the scattering coefficient

. We have introduced the coefficients

In the case of the Rayleigh scattering, we have also provided a closed form to calculate the amount of light that is subjected to atmospheric scattering per single interaction:

When evaluated at sea level, which means using

, it produces the following results:

are the wavelength which loosely maps to red, green and blue.

What is the meaning of those numbers? They represent the ratio of light that is lost by a single interaction with a particle. If we assume a ray of light has initial intensity

, then the amount of light that is not lost to scattering is:

While this holds for a single collision, we are interested in understanding how much energy is scattered over a certain distance. This means that, at each point, the remaining light is subjected to this process.

When light travels through a uniform medium with scattering coefficient

, how can we calculate how much of it survives after travelling for a certain distance?

For those of you who have studied Calculus, this should sound familiar. Whenever a multiplicative process like

is repeated over a continuous segment, the Euler’s number makes its grand appearance. The amount of light that survives scattering after travelling for

. The reason why both phenomena are described by exponential functions is that they are both subjected to exponential decay. Besides that, they are no other connections between them.

❓ Where does exp come from?
If you are unfamiliar with Calculus, you might struggle to understand how a process as simple as

We can see the original expression as a first approximation of our solution. If we want to get a closer approximation, we can take into account two scattering events, halving the scattering coefficient for each one:

This new expression for

indicates how much energy survives two collisions. What about three? Or four? Or five? We can generalise this with the following expression:

is the mathematical construct that allows repeating a process infinitely many times. This is necessary since

is technically not a number, hence it does not make sense in this context to write something like \frac{\beta}{\infty}.

That expression is the very definition of the exponential function:

which describes the amount of energy that survives a multiplicative process over a continuous interval.

, as the ratio of light that survives the scattering process after travelling through the atmosphere. We now have all the elements we need to finally derive an equation that describes it.

Let’s look at the diagram below, and see how we can calculate the transmittance factor for the segment

travel through empty space. Hence, they are not subjected to scattering. The amount of light at

is, therefore, the sun intensity

. During its journey to

, some of the light is scattered away from the path; hence, the amount of light reaching

, will be lower than

is the exponential function

) is the same for each point along

. Sadly, that is not the case.

The scattering coefficient strongly depends on the atmospheric density. More air molecules per cubic metre mean higher chances of impact. The density of a planet’s atmosphere is not uniform, but changes depending on the altitude. This also means that we cannot calculate the out-scattering over

in a single step. To overcome this issue, we need to calculate the out-scattering at each point, using its own scattering coefficient.

To understand how this work, let’s start with an approximation. The segment

is split in two,

We calculate first the amount of light from

Then, we use the same approach to calculate the amount of light that reaches

in the second equation and simplify, we get:

, we can further simplify our expression:

We can repeat this process with an arbitrary number of segments, getting closer and closer to the actual value. This leads to the following equation:

is the altitude of the point

The approach of splitting a line into multiple segments just like we have done is called numerical integration.

, we obtain the equation for the atmospheric transmittance over an arbitrary segment:

We can further expand this expression by replacing the generic

with the actual value used by the Rayleigh scattering,

are constant and can be factored out of the summation:

If you are interested in this topic, I would also suggest reading Carl Davidson post on atmospheric scattering, where he used an improved version of this iterative approach.

This post explained how to model Earth’s atmosphere. With the next post, we will start writing the shader code necessary to simulate atmospheric scattering.