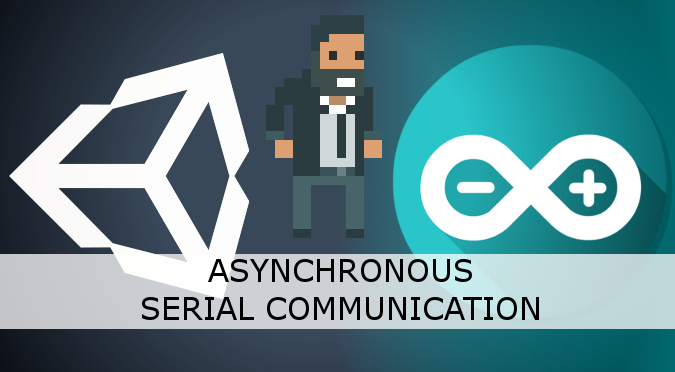 In a previous post, How To Integrate Arduino With Unity, we have shown how data can be sent and received through the serial port. The main problem encountered was dealing with the latency and the delays that communicating across different devices introduces. The solution proposed in that tutorial used a coroutine; decoupling the device communication from the game logic attenuates the problem, but it doesn’t remove it. The main problem is that, despite the name, Unity coroutines are not really executed in parallel with the rest of the game. Unity, by design, is not thread safe. This means that true parallelism is intentionally avoided by the engine, as it could result in race conditions. To solve the problem of the communication between Unity and Arduino, once and for all, we need actual threads.

At the end of this tutorial, you can find a link to download the Unity package.

C# supports threads with its System.Threading library. When a new thread is created, a function has to be provided. In the following example, that function is called ThreadLoop .

When code is executed in parallel, the traditional pattern of request and response typical of most imperative languages breaks. We cannot expect a function that, once invoked, returns when some data from Arduino is available. A very common approach relies on callbacks. With callbacks, the logic flow of the game is as follow:

This was exactly the approach used in How To Integrate Arduino With Unity, implemented in the coroutine AsynchronousReadFromArduino.

That approach, unfortunately, won’t work with threads. The thread that communicates with Arduino can complete its request at any moment in time. As a result, its callback could potentially be executed in an environment that is not thread safe. To make it simple: Unity objects cannot be touched or manipulated in a thread.

C# has an effective implementation of synchronised queues that are safe to use between different threads:

Please note that the class Queue, by itself, is not guaranteed to be thread safe. The Queue.Synchronzed wrapper makes an existing queue thread safe (MSDN).

Now that we have two queues, we need some code that allows an external MonoBehavior script to send and receive data. Using the queue in this setup is relatively straightforward:

Please, note that now that we are using queues, it is your script’s responsibility to periodically query the queue for incoming messages.

The final part of code necessary is the actual body of the thread. It consists of two parts; a setup, and a loop. The setup opens the serial connection with Arduino. The loop keeps it open, sending and receiving messages through the synchronised queues:

Note that the functions WriteToArduino and ReadFromArduino are taken from the first part of this tutorial, How To Integrate Arduino With Unity.

The code shown so far is not very reliable, as it doesn’t take into account possible errors and exceptions. A better implementation should always make sure that all the possible exceptions are captures and properly handled.

Another aspect that has not been considered is the closure of the serial port. There are several approaches that can be done, but they all need a way for a Unity script to alter the state of a thread. For instance, by adding a boolean variable called looping that can be used a guard for the thread loop.

To be pedantic, a script should never directly change the variable used by a thread. Given how simple this script is, it’s safe to assume that there are virtually no side effects. If you want to play safe with thread, each access to a shared variable between different threads should be mediated through a lock, like this:

The keyword lock ensures that no two threads can edit the object at the same time. This is who thread safe code is developed in C#. But it can also be the start of an endless stream of drama called deadlocks.

To ensure thread safety, every potentially concurrent access to the variable looping must be enclosed in a lock block. This also includes the access that is done in the guard of the while loop in the ThreadLoop function:

The method StopThread can now be invoked safely from any Unity script.

This post extends the original tutorial on Arduino and Unity. It shows how a thread can be used to avoid delays when waiting for data on the serial port. This post was inspired by Daniel Wilches’ asset SerialCommUnity.

You can download the Unity package for this tutorial on Patreon. The package allows connecting Unity and Arduino for efficient and effective two-way communication using threads. It also contains several examples to test your setup.