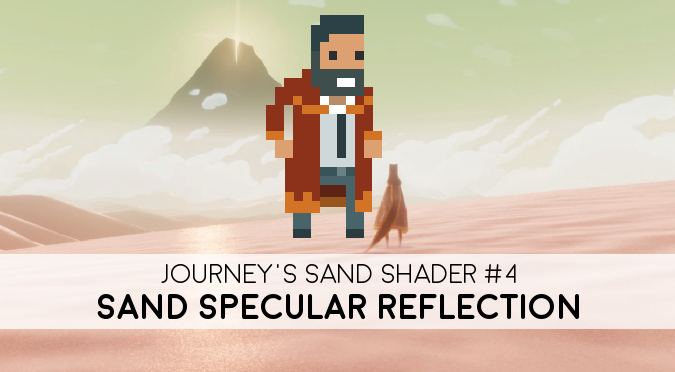 This is the fourth part of the online series dedicated to Journey Sand Shader.

In this fourth post, we will focus on the specular reflections that make the dunes look like an ocean of sand.

One of the most intriguing effects of Journey‘s sand rendering, is the way dunes shine in the light. Such reflection is called specular, from the Latin speculum, which means mirror. Specular reflection is an umbrella term that includes all those types of interactions in which light is strongly reflected in one direction, instead of being scattered and diffuse. It is because of specular reflections that both water and polished surfaces appear to shine at certain angles.

Journey features three different types of specular reflections: rim lighting, ocean specular and glitter reflections, as seen in the diagram below. In this lecture, we will address the first two. 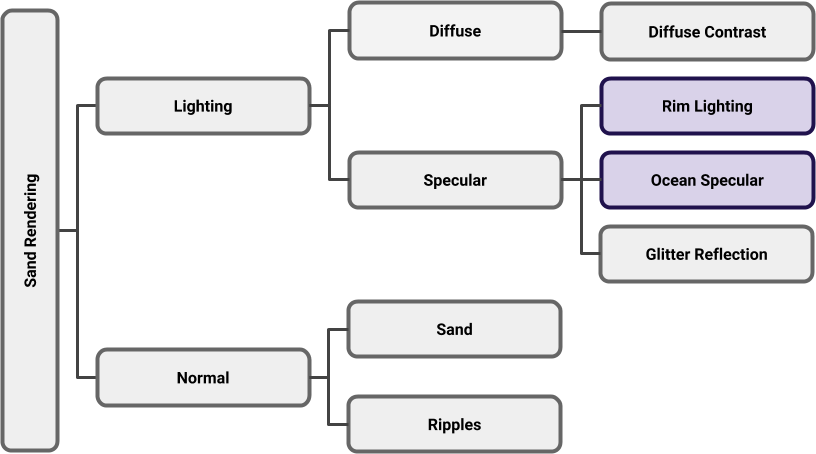 You might have noticed that each level of Journey features a limited set of colours. While this adds to its strong and clean aesthetic, it is rather problematic for the sand rendering. Dunes are only rendered using a handful of shades, so it might be impossible to distinguish where one ends and another starts in the far distance.

To compensate for this, the edge of each dune presents a subtle shimmering effect, which highlights its contours. This prevents dunes from disappearing into the horizon, and gives the illusion of a much larger and complex environment.

Before exploring how such an effect can be achieved, let’s extend the lighting function presented in the first lecture to include both the diffuse colour (previously discussed in Journey Sand Shader: Diffuse Colour) and a new generic specular component.


In the snippet above we can see that the specular component of the rim lighting, called rimColor, is simply added to the original diffuse colour. ❗ High Dynamic Range and Bloom Effects
Both the diffuse component and the rim lighting are RGB colours ranging from

. The final colour is given by their sum. This means that, potentially, it might be greater than

If you are new to shader coding, you might know that colours should be clamped between

. However, there are cases in which we want colours to be greater than

. If your camera is set to support High Dynamic Range, pixels with an intensity greater than

will “leak” light onto nearby pixels. This technique is used to simulate bloom effects, halos and specular highlights. However, it requires a post-processing effect to perform this operation.

There are many ways in which a rim lighting can be achieved. The most common in shader coding relies on the well-known Fresnel reflectance model.

❓ How to pronounce Fresnel?
It’s /frəˈnɛl/, which sounds a bit like fruh-nel.

If you have learnt shaders from written tutorials, you might have never heard the correct pronunciation of Fresnel. As a form of respect towards those researchers which works we are using every day, I believe we should all make an effort to pronounce their names correctly.

To understand the equation behind the Fresnel reflectance, it is helpful to visualise where it occurs. The diagram below shows a dune seen by a camera (in blue). The red arrow indicates the surface normal to the top of the dune, which is where we want the specular reflection to be. It is easy to see that all edges of the dune share a similar property: their normal (

, in red) is orthogonal to the view direction (

Similarly to what we have done in  Journey Sand Shader: Diffuse Colour, we can use the dot product between

to get a measure of their alignment. In this case, the

when the two unit vectors are orthogonal; we can use

instead, to measure how misaligned they are instead.

directly would not yield good results, as it reflects way too much. If we want to make the reflection sharper, we can simply take its power. The power of a value between

remains bounded within the same range, but the transition between light and dark becomes sharper.

The Fresnel reflectance model states that the intensity of light

are two parameters that can be used to control the contrast and the strength of the effect.

are sometimes called specular and gloss, although naming conventions may vary.


Its result can be seen in the animation below.

One of the most peculiar aspects of Journey‘s gameplays is that, at times, the player is literally surfing on the dunes. Lead Engineer John Edwards explained how thatgamecompany indeed wanted the sand to feel more like a fluid, than a solid.

This is not entirely incorrect, since sand can be thought of as a rough approximation of a fluid. And under certain circumstances, for instance in an hourglass, it does behave like one.

To reinforce the idea that sand could have a fluid component, Journey adds a second specular effect, which is often seen on liquid bodies. John Edwards referred to this as ocean specular, and the idea is to get the same type of reflection that you would see on an ocean or lake at sunset (below). 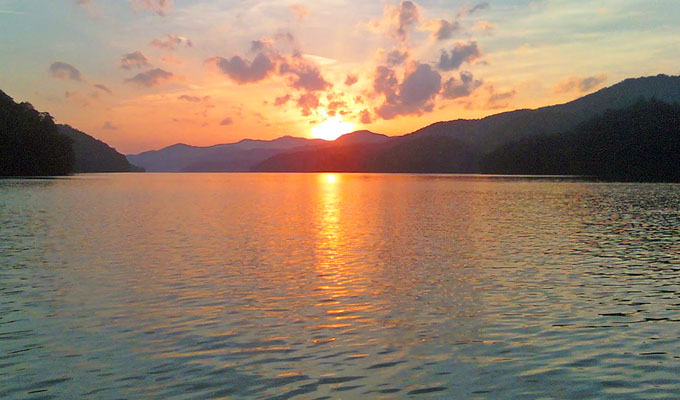 As before, let’s change the lighting function LightingJourney to include a new type of specular reflection.


❓ Why do we take the maximum of the two specular components?
It is likely there will be an overlap between rim lighting and ocean specular. Certain parts of the dune, especially at glazing angles, might exhibit both Fresnel and Blinn-Phong reflectance. Summing both contributions would make dune too shiny.

Taking the maximum is an efficient, yet effective way to avoid this problem.

Specular reflections on water are often implemented using the Blinn-Phong reflectance, which is an inexpensive solution for shiny materials. It was first described by James F. Blinn in 1977 (paper: “Models of Light Reflection for Computer Synthesized Pictures“), as an approximation of an earlier shading technique developed by Bùi Tường Phong in 1973 (paper: “Illumination for Computer Generated Pictures“).

of a surface is given by the following equation:

The denominator of (3) divides the vector

by its length. This ensures that

. The equivalent shader function to perform this operation is normalize. Geometrically speaking,

represents the vector “in between”

, which is why is called the half vector. 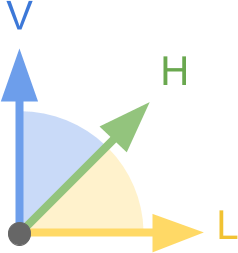 ❓ Why is H in between V and L?
It might not be intuitive to understand why

is the vector in between

To understand why, lets, we should recall the Parallelogram law, which gives a geometrical interpretation to the sum between two vectors. The sum of

can be found by translating

at the end of

, and drawing a new vector from the base of

to the tip of

The second step involved is to understand that the two quantities

are the same. This means that the following two geometrical constructions are the same:

We can join them to form a parallelogram, which sides share the same length. Because of this, we have the guarantee that the diagonal (which is

) bisects the angle. This means that the blue and yellow angles are equal (below, left).

Now we know that

is a vector in between

, but its length is not guaranteed to be

. Normalising means stretching it until it reaches length

, making it into a unit vector (above, right).

For a more detailed description of the Blinn-Phong reflectance, you can read Physically Based Rendering and Lighting Models. Below, you can see a simple implementation in shader code.


The following animation provides a comparison between a traditional diffuse Lambertian shading and a specular Blinn-Phong one:

In this fourth part of the online series about the sand rendering in Journey, we focused on the shimmering reflections that make Journey’s dunes appear almost like an ocean.

In the next part, Journey Sand Shader: Glitter Reflection, we will continue working on the specular reflections, adding tiny glitters to the dunes to make it even more realistic.