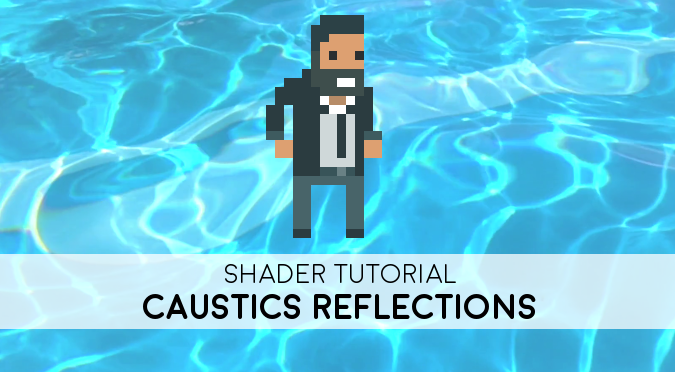 At the end of this article, you will also find a link to download the Unity package with all the assets necessary.

You might be unfamiliar with the terms caustics, although there is no doubt that you are experiencing them every day. Caustics are the light reflections caused by curved surfaces. Generally speaking, any curved surface can behave like a lens, focusing light on some points and scattering it on others. Glasses and water are the most common medium that allows their formation, giving life to the so-called ripple caustics (below). 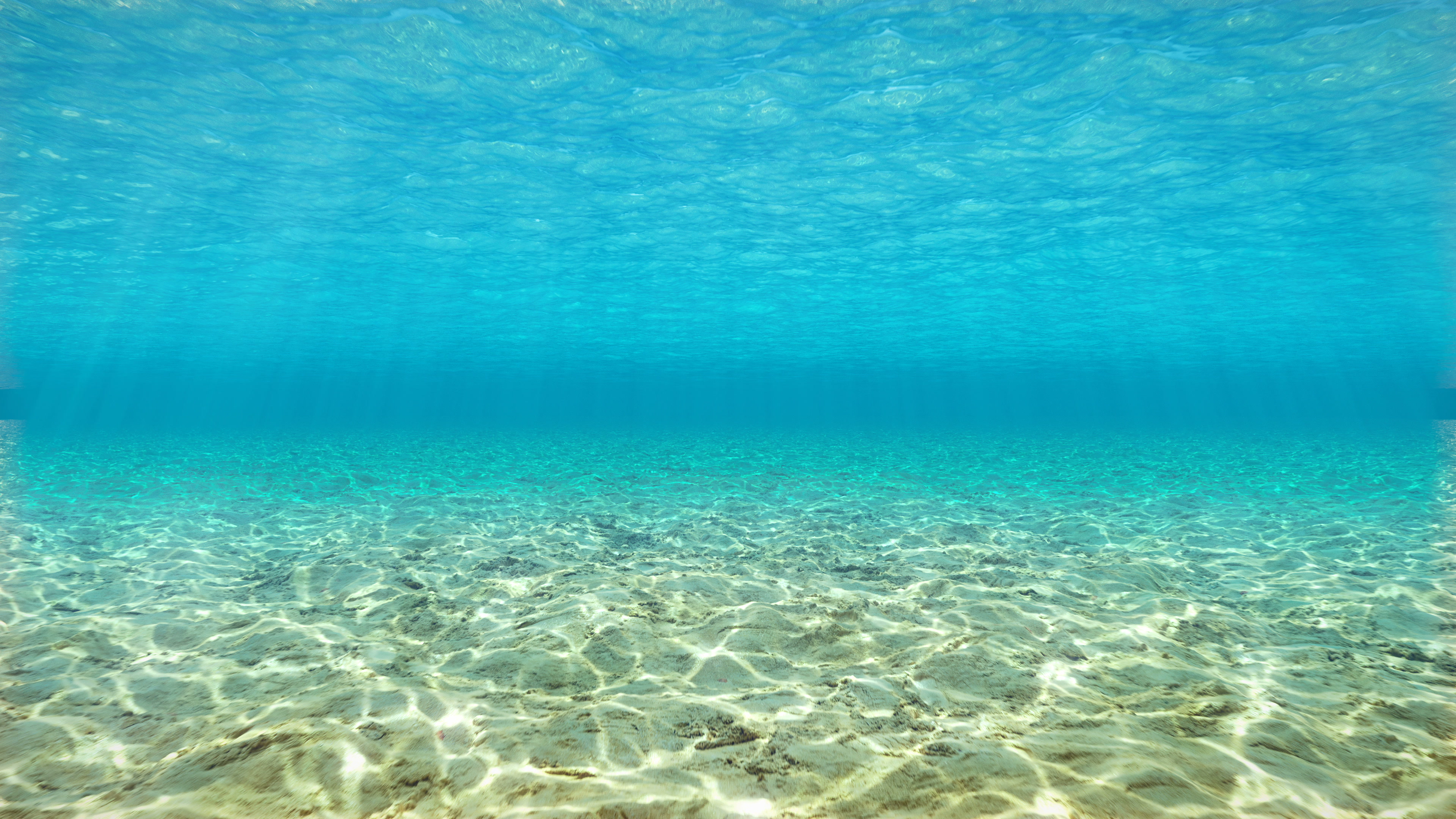 Caustics can take many other forms. Rainbows, for instance, are optical phenomena that can occur when light is deflected by raindrops. Consequently, they technically are caustics.

One very recognisable of ripple caustics is the way they move; something that you have probably experienced if you have ever looked at the bottom of a pool. Recreating actual caustics is very expensive, as it requires the simulation of many rays of light.

Florian managed to create a believable effect starting from a single texture of a caustics. To create this tutorial, I have used the texture below, taken from OpenGameArt.

One important feature that makes this effect working is that the caustic pattern above is tileable. It means that you can place two images next to each other, and they will blend seamlessly. Since we want to use this effect on large surfaces, it is important that we can stretch it without discontinuities that would otherwise break the illusion.

Once this texture is available, Florian suggests three steps:

Let’s see how we can achieve each step in Unity.

The first step is to create a new shader. Since this effect is likely to be used in a 3D game where real lighting is also present, the best option is to start with a Surface shader. Surface shaders are one of the many types of shaders that Unity supports (others include Vertex and Fragments shaders for unlit materials, Screen shaders for postprocessing effects and Compute shaders for off-screen simulations).

A newly created Surface shader has only a few properties. For this effect, we need to pass more information to the shader. First of all, the caustic texture. Secondly, the parameter used to scale it and offset it.

and their respective Cg variables:

Shader properties correspond to the fields that appear in the Material inspector in Unity. Their respective Cg variables are the actual values that can be used in the shader code.

As seen above, _Caustics_ST is a float4, meaning that it contains four values. We will use them to control how the caustics texture is sampled. Namely:

❓ Why is this called _Caustics_ST?
If you have a little bit of experience with shaders, you might have seen other properties ending with the suffix _ST. In Unity,  _ST can be used to add a few more pieces of information on how a texture is sampled.

For instance, if you create the Cg variable float4 _MainTex_ST, this can be used to decide its size and offset when it is wrapped onto a model.

Usually, _ST variables do not need properties as they appear automatically in the inspector. In this specific case, however, we cannot rely on this since we need to sample the texture twice, each time with a different scale and offset. In the next sections, in fact, we will need to duplicate that variable into two distinct ones.

Every surface shader contains a function, typically called surf, which is used to decide the colour of each pixel being drawn. A “basic”  surf function looks like this:

The final colour is determined by a series of fields that the shader has to initialise and return in a structure called SurfaceOutputStandard. The field we are interested to change is the Albedo, which loosely corresponds to the colour of an object when lit under white light.

In a newly created surface shader, the albedo comes from the texture, called _MainTex. Since the caustics effect is added on top of the existing texture, we will need to perform an additional texture sampling from _CausticsTex.

The idea is to use _Caustics_ST to scale and offset the uv_MainTex, so that we can effectively stretch and move the caustics texture on the model.

❓ What happens if the Albedo goes above 1?

In the code above, we are adding two textures together. Colour usually range from

, although there is no guarantee here that the operation will not cause some of them to go beyond that.

In older shaders, this could have been a problem. In here, it is actually a feature. If the colour of a pixel is above one, it means that its contribution should “leak” beyond its boundaries and affect nearby pixels.

This is exactly what happens when you have very bright specular reflections. However, it is not something that a surface shader will do on its own. In order for this effect to work, your camera needs to have HDR enabled. That stands for High Dynamic Range, and allows colour values to go beyond

. You also need a postprocessing effect to actually blur that excessive amount of colour on the nearby pixels.

Unity comes with its own postprocessing stack which contains a bloom filter that does exactly this job. You can read more about that on the Unity blog: PostFX v2 – Amazing visuals, upgraded.

The preliminary result can be seen below:

One of the most important features of caustics is the way they move. At the moment, they are statically projected on top of the model as a second texture.

Animating materials in shaders is possible using the _Time property that Unity exposes. It can be used to access the current game time, hence allowing to add time into our equations.

The easiest way is simply to offset the texture based on the current time.

The field _Time.y contains the current game time in seconds. If that makes your reflection too fast, you can scale it down with a multiplicative coefficient. This is what the float2 variable _CausticsSpeed has been used for in the code above.

Based on what you want to achieve, you might decide to force the caustics texture to oscillate in a sinusoid fashion instead. It is important to stress that there is no standard way to do this. Based on what you need, you might want your caustics reflections to move in a completely different way.

The results, seen below, is still rather underwhelming. That is ok, since there is still a lot left to do to make these caustics reflection look good.

What brings life to the effect, is sampling the caustics textures not once, but twice. Overlapping two of them which are moving at different speeds will make a massive difference.

The first step is to duplicate the _Caustics_ST and _CausticsSpeed properties, so that the two texture samplings can have different scales, offsets and speeds:

When you have two caustics samples available, they can be blended using the min operator. Simply averaging them will not yield a good result.

Such a small change, makes an enormous difference:

To keep your code tidy, you can also wrap the caustics sampling code in its own function:

There is one final trick that we can use to make these caustics reflections look good. Different wavelengths of light diffract differently when passing through a medium. This means that light can “split” into different colours, when it moves through water.

To simulate this effect, we can split each caustics sample into three. One for each colour channel. By sampling the red, green and blue channels with a slight offset, we can cause the colours to misalign.

Let’s start by adding a _SplitRGB property, which indicates how strong the split effect will be:

Deciding how to offset the RGB channels is pretty much an arbitrary choice. But even using such simple offsetting produces a very convincing look:

If you are interested in learning how tileable caustics textures can be created, Periodic Caustic Textures is an interesting read.

In the meantime, Florian is still working on his caustics shader and has some pretty neat improvements you might want to have a look at.

Here's another look at it, moving objects through the water. Works on everything, that's writing to the depth buffer!

The full package for this tutorial is available on Patreon, and it includes all the assets necessary to reproduce the technique here presented. The package has been exported using Unity 2019.2, and requires the Postprocessing Stack v2.