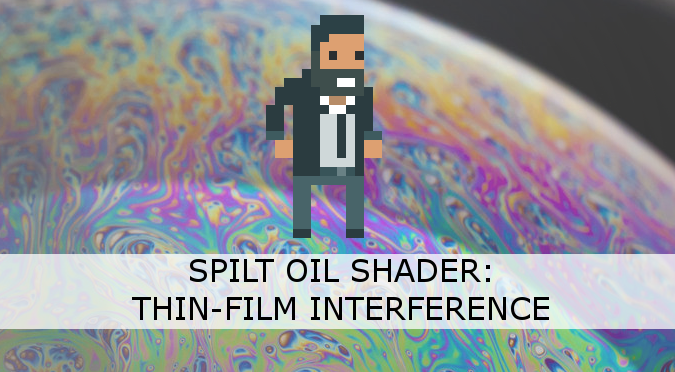 This post completes the journey started in The Mathematics of Thin-Film Interference, by explaining how to turn the equations previously presented into actual shader code.

In the previous post, we derived the equations that govern the process of thin-film interference. In a nutshell, this is an optical phenomenon that occurs when light “bounces” inside a medium which thickness is comparable to the light wavelength.

When this happens, there is a chance that some of the light immediately reflected off the surface will end up interfering with the light refracted inside the medium.

Because the two rays travels different lengths, they might end up off-phase. This means that even if the wavelengths started at the same phase, by the time both rays leave the material surface, their phases might be out of alignment.

This situation causes some wavelengths to interfere constructively, and some to interfere destructively. This means that some colours will be amplified, while other will cancel each other out. As a result, this effect causes unusual reflections, which are strongly dependent on both the view angle and the light angle.

In real life, this effect is predominantly visible in soap bubbles, which displays beautiful iridescent colours.

The effect is also commonly seen in oil spills, and are predominant in certain metals such as bismuth. In the latter, this is due to the fact that the entire surface is covered in a thin film of bismuth(III) oxide. Companies like The Bismuth Smiths have found a way to control the thickness of this oxidised layer, allowing them to master full control over the colour of those crystals.

More notoriously, thin-film interference is exploited in many iridescent car paints, such as the ones seen in this video:

The quickest way to implement this effect is to retrofit the existing iridescent shader created in part 2 of the CD-ROM Shader: Diffraction Grating series. This is because most of the code is identical, with the small exception of the LightingDiffraction function which will need to implement the new equations.

In the previous tutorial, we have seen the mathematical condition necessary for thin-film to occur for a given wavelength. Its wavelength (

) must be an integer multiple of

as seen in this diagram:

Our shader code, has only access to the light direction

and the world normal

is easy to find, as the dot product between

Finding the value of

is trickier, but can be done through Snell’s law:

from which we can easily extract

In shader code, this becomes:

We can now use thin-film interference condition to find if a given wavelength is reflected back to the viewer:

Here, we have used the same trick used in the CR-ROM shader. Instead of looping through all possible wavelengths (calculating if each

interferes constructively or destructively) we check all integer multiples of

This, unfortunately, is not enough to get to the real effect. There is only a small problem we need to fix. Under certain circumstances, the phase can shift by 180 degrees. This happens when a ray of light travels from a material to another, and the first refractive index is lower than the second.

Our code needs to check if this shift happens on both reflections:

Once we have the shift, we can simply add it to n to obtain the correct phase shift that light goes through when bouncing into the thin-film.

❓ How can I use my own colours for the reflection?

You can’t. Not if you want a physically based effect. That being said, you can replace the spectral_zucconi6 function with a texture ramp of your choice. By doing this, you can change the rainbow reflection into one you like better.

However, doing so causes the effect to lose any connection with the physical mechanism that causes thin-film interference. In such a case, you might be better to just fake the effect entirely, for instance using a fake BRDF shader like the one presented in Iridescence on mobile, which bakes the reflection into an easily editable texture.

This tutorial completes the series about iridescent material.

You can download the Unity package for the CD-ROM Shader effect on Patreon.