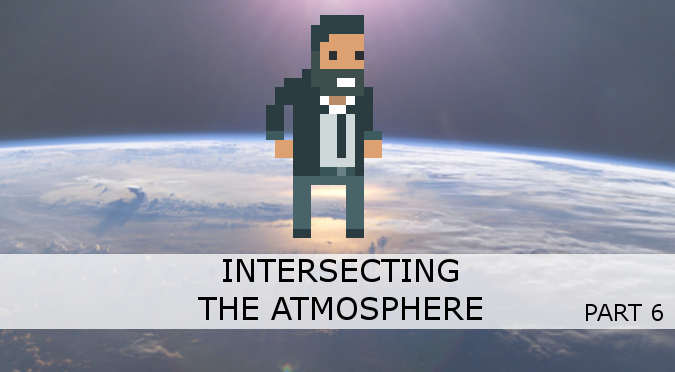 As discussed before, the only way we can calculate the optical depth of a segment that passes through the atmosphere, is via a numerical integration. This means dividing out interval in smaller segments of length

, and calculating the optical depth of each one assuming its density is constant.

In the image above, the optical depth of the

is calculated with 4 samples, each one only taking into account the density at the centre of the segment itself.

The first step is, obviously, finding the points

. If we operate under the assumption that the objects we are rendering a sphere, Unity will try to render its surface. Each pixel on the screen corresponds to a point on the sphere. In the diagram below, that point is called

for origin. In a surface shader,

corresponds to the worldPos variable inside the Input structure. This is how far the shader goes; the only piece of information available to us are

which indicates the direction of the view ray, and the atmospheric sphere centred at

. The challenge is to calculate

. The fastest way is to use a geometrical approach, reducing the problem to finding the intersection between the atmospheric sphere and the view ray from the camera.

First of all, we should notice that

are all lying on the view ray. This means that we can refer to their position not as a point in 3D space, but as the distance on the view ray from the origin. While

is the actual point (represented in the shader as a float3),

will be its distance from the origin

are two equally valid ways to indicate the same point, and it holds that:

where the overline notation

indicates the length of the segment between some arbitrary points

For efficiency reasons, in the shader code we will use

, and calculate it from

We should also notice that the segments

have the same length. What we need now to find the intersection points is to calculate

the easiest to calculate. If we look at the diagram above, we can see that

is the projection of the vector

onto the view ray. Mathematically this projection can be done with the dot product. If you are familiar with shaders you might know the dot product as a measure of how “aligned” two directions are. When it is applied to two vectors and the second one has unitary length, it becomes a projection operator:

One should notice that

is a 3D vector, not the length of the segment between

. This can be calculated using Pythagoras’ theorem on the triangle

is still unknown. However, it can be calculated by applying once again  Pythagoras’ theorem on the triangle

We know have all the quantities that we need. To sum it up:

That set of equation contains square roots. They are only defined on non-negative numbers. If

, then there is no solution, meaning that the view ray does not intersect the sphere.

We can translate this into the following Cg function:


There is not a single value, but three to return:

and whether or not there is an intersection. The lengths of those two segments are returned using the out keywords, which makes any change the function does on those parameters persistent after its termination.

Colliding with the Planet

There is an additional issue that we have to take into account. Certain view rays hit the planet, hence their journey through the atmosphere reaches an early termination. One approach could be to revise the derivation presented above.

An easier, yet less efficient approach, is to run rayIntersect twice, and then to adjust the ending point if needed.

This translates to the following code:

This post showed how it is possible to find intersections between a sphere and a ray. We will use this in the next post to calculate the entrance and exit points of the view ray with the atmospheric sphere.