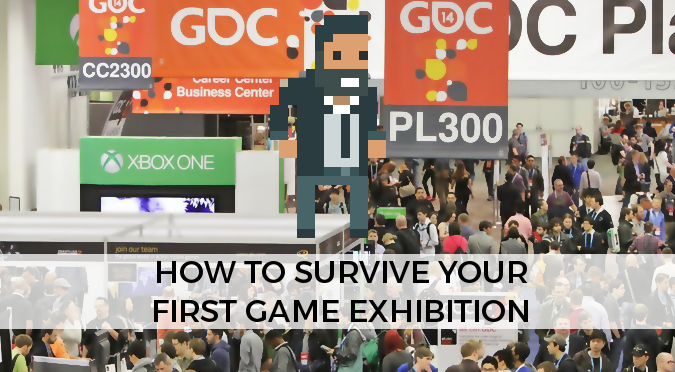 Let’s be honest: successful game development is not about developing a game. Is about being able to find an audience for your game. A mistake that many independent developers are doing is to push all their resources into the actual making, leaving little to no budget for networking and marketing. Being able to build hype around your game is, in most cases, essential. You shouldn’t expect people to love what your games just because you do. In the past few months I’ve received several messages from young developers asking me for advice on how to approach their first game exhibition. Whether you’re going to be an exhibitor or an attendee, that’s the post for you.

The first important question when there’s a new event is whether you’ll be attending it or now. Events are cool, and the first idea is to attend as many as you can. Every event you attend has the potential to expand your audience and your network. However, the more events you do the less benefits you’ll have from attending another one. When the majority of people know you, the cost of the event can overweight its benefits. The first step to understand which events are important (for you) and which really aren’t, is planning.

To pay or not to pay

One of the most controversial aspects of exhibiting a game is whether you’ll pay or not for your booth. Many events, such as Rezzed and EGX have both options (namely, the Leftfield Collection and the Virgin Media Game Space). Other spaces for indies, such as the Indie Mega Booth can cost at least $1500 per kiosk. If your game is not out yet, that money might not be recouped at all. Even if your game is out, the spike of just showcasing your game at a game event might not be anything special. After all there are other dozens (if not hundreds) of games showcased and is unlikely players will go home and buy yours, even if they liked it.

<personalOpinion>If you’re an indie developer, I believe you should not be asked to pay: which part of indie wasn’t clear enough?! At the same time, I do understand events and organises are often run by volunteers and they incur in costs which need to be recouped. The real problem in asking developers to pay is that this automatically excludes the majority of indies. I think is important to ensure quality content by having an entry barrier for games. But this should affect the games, not the financial state of the developers. The indie revolution has started by passionate people who wanted to make better games on a zero budget; if they were charged to make games, we probably wouldn’t have an indie culture in the first place.</personalOpinion>

The majority of events require a ticket to enter. Events directly oriented to players are usually quite cheap. Others, such as GDC and Develop are not. When this is the case, events have an indie ticket which should be fine. Even if you can’t attend all the talks or see all the part of the expo, you can still do networking. Even if you don’t have a ticket you can sometimes enjoy most of the event: Mild Rampus and Games by the Sea overlaps big events and are free to attend. You’d be surprised by how many people hang out in the ground floor of the Moscone Center during GDC, without having at ticket. 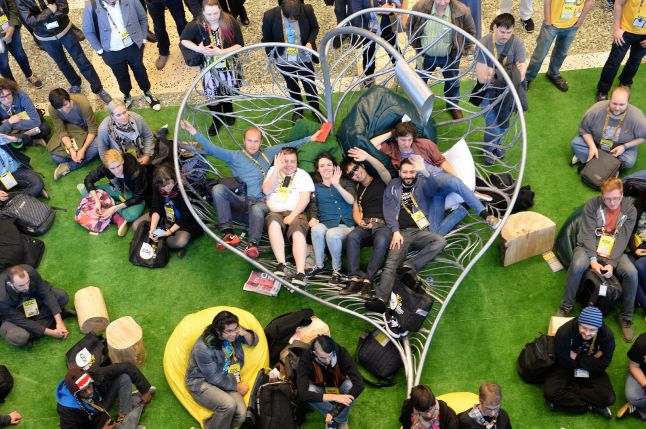 Travel is usually an annoyance. But if you plan your journey cleverly, you can use that time in an interesting way. The Train Jam is a game jam which happens on the train from Chicago to San Francisco and is attended by many developers travelling to GDC. It’s one of the best way to break the ice and meet other passionate developers. Last year the event was featured on the documentary Rise of the Indies. Even without going that extreme, you can still meet interesting people if you plan your journey carefully.

Accommodation-wise, the best option is to share something with other developers. I’ve been in “indie houses” before, and despite the banter can sometimes be exhausting, they’re a good way to save money and make friends our of colleagues. If you know for sure you’re attending GDC, you better rush and book a room at the famous Indie Hostel.

Making the most of a game exhibition is very hard. If you’re exhibiting you’ll most likely be standing and talking non-stop for days. Even worse, people will ask you the same questions. OVER AND OVER AGAIN. And you have to keep the same passion every time you explain your game. Find a good elevator pitch so that you can explain what your game is about, or what you’re doing exactly, in no more than thirty seconds. I’m sorry to burst the bubble for you but “I’m working on an indie game” is not a pick-up line any more. Every developer there is making a game, and every players has played dozens of games. What makes your special (besides you making it!).

«I’m working on a an indie game» is not a pick-up line any more.

If you’re a game developer, attending an exhibition is a real job, no matter if you’re presenting your game or not. Exhibition can be very expensive, both money and time-wise. Take both these aspects into consideration. Try to get the most out of it by expanding your network as much as you can. Be someone people will remember and engage with them shorty after the event. And lastly, remember that learning which events not to attend is harder than attending all of them.