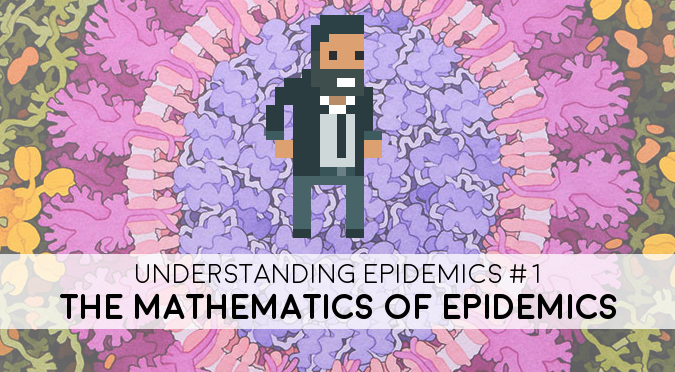 It is impossible to deny that the recent pandemics of COVID-19 has changed the world we live in. With a significant part of the world population under lockdown, most people living in Western countries have been—one way or another—affected by the novel coronavirus (below, an artistic rendering by David S. Goodsell). Now more than ever, we are bombarded with a constant stream of contradicting news and inconsistent policies. Technical terms such as exponential growth, social distancing and logarithmic plots are now commonly used on both TV and social media. And without the right background, it might be very difficult to make sense of the numbers that are constantly been updated every hour. When colleagues, friends and relatives are getting ill, it is only natural wanting to do everything in our power to help them. And, paradoxically, we are being told to stay home and do nothing. It is hard to understand how any good could actually come out of inaction. 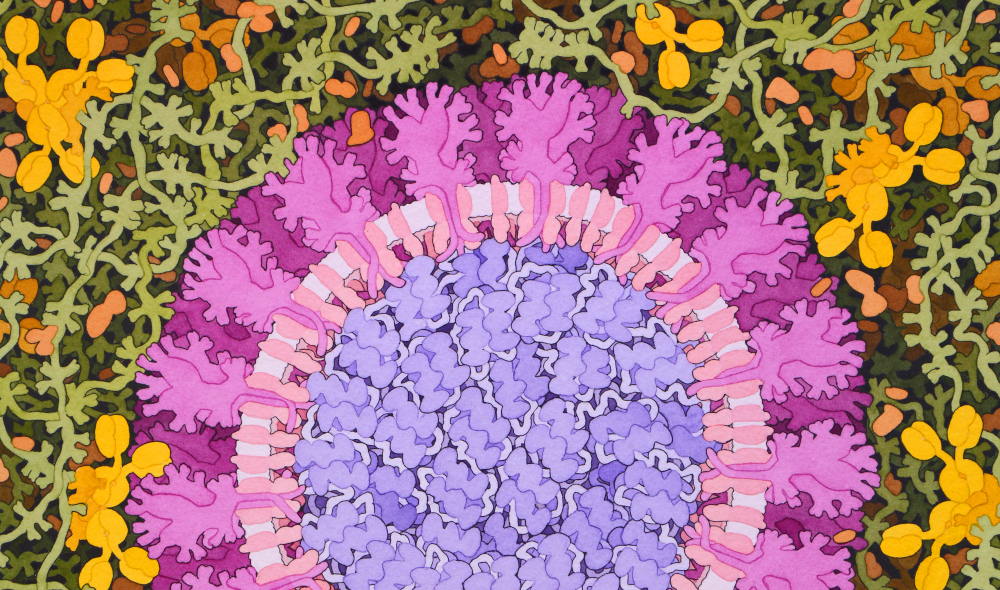 As a Science Communicator—one which family has been affected—I feel is important I take this opportunity to add my contribution to the current discourse. Not the one surrounding COVID-19 (for which I am not really qualified to talk about), but the study and simulation of epidemics. Since 2015, I have talked extensively about the power of simulations, and how they could be used to solve a variety of different problem. From simulating the process of evolution by natural selection (Evolutionary Computation) to harnessing the power of modern GPUs (How to Use Shaders for Simulations), up to the creating photorealistic rendering of a planet’s sky (Volumetric Atmospheric Scattering).

If you want to understand how scientists model and simulate the evolution of epidemics and the spread of diseases on large populations, this is the right place. I sincerely hope this series of articles will not only give you the tools to better understand the terminology and numbers surrounding the current pandemics. I ultimately hope it will inspire more passionate developers to proactive study and research the fascinating fields of epidemiology. Just a few days ago, the Royal Society started coordinating the Rapid Assistance in Modelling the Pandemic (RAMP): an urgent call to action addressed to the scientific modelling community, recruiting developers, programmers and data scientists all over the UK to study and predict the evolution of the current COVID-19 pandemic. While hundreds of thousands nurses and doctors are saving lives every day, there are probably as many researchers and developers who are working around the clock to end the current pandemic. Those are hidden heroes which might end up saving your life, even though you never met them.

There are probably many researchers and developers who are working around the clock to end the current pandemic. Those are hidden heroes which might end up saving your life, even though you never met them.

Epidemics are very complex social phenomena that involve millions of people, over hundreds of countries. They are undeniably driven by the individual choices of each person involved, although they ultimately follow very recognisable patterns.

At first glance, this might seem counterintuitive. If the decisions of each person are arbitrary and unpredictable, how could an overall population made out of millions of them become suddenly predictable?

Let’s try to answer this question with a simple example. Let’s imagine a population of arrows, each one pointing in a different direction (below). What is the “overall” direction they point at? If we assume there is a sufficiently large number of them, it is also reasonable to assume that for each arrow pointing in a certain direction, there is another one pointing in the opposite one. The more arrows we have, the more confident we can be about the fact that their sum cancels out.

One of the most simple ways to model the evolution of an epidemic is to only focus on the number of infected people,

, and how it varies over time. In an ideal scenario, we can imagine one single person infecting a certain number of people during their lifetime,

In the expression above,

represents the number of infected people on a certain day

the ones infected on the following day. That is known as a recurrence relationship, as the value for

. If you are familiar with programming, recurrence relationships are the mathematical equivalent of recursive functions.

We can expand the equation by noticing that it follows a simple pattern:

It is easy to see that we can generalise this with a traditional closed-form expression:

which is an exponential curve. This means that if every infected person always infects

other people, the epidemics follows an exponential growth.

The equation was firstly derived by Thomas Robert Malthus in 1798, where it was used to described the growth of a population over time.

The model presented in the section above works very well during the early stages of an epidemic. However, it is clear that such growth cannot be sustained because we will reach the point where all people are infected. After an initial explosion, the number of infected people will start growing slower because the more people are infected, the harder it is to find someone new who can be infected.

The idea is to change (3) by adding a factor that can slow down the exponential growth. We can think about

not as a constant anymore, but as a function which depends on how many people have already been infected,

When the model starts,

should have a base value

, which will cause the exponential growth seen in the previous section. However, the more we approach a certain capacity

, the harder it is to infect people, and the smaller

What we want, in a nutshell, is to enforce the following properties:

The simplest way to model this new function is with a linear mapping:

We can now update (1), replacing

The new equation results in the so-called logistic growth, which approximately very well the growth of populations and the spread of diseases.

Converting the recurring expression for

into a closed-form one is not as easy as it was for the exponential growth, as this is now a fully-fledged ordinary differential equation. For this reason, I will omit the full derivation; its solution take the form of the well-known logistic function:

changes. While “traditional” equations give an expression to calculate

as a function of

, differential equations express how the rate of change of

evolves, based on its current value.

For instance, if the variable

never changes its value, its rate of change will be zero:

This expression only tells that the function never changes, but does not tell what value it actually has. For instance, in the case of an exponential growth, the rate at which

grows depends on the value of

Some phenomena, especially in Physics, are better described by differential equations.

Solving a differential equations means finding the value of

. It is not always possible to find a closed-form expression that represents for

, given a differential equation. However, it is often possible to find an approximated solution using numerical methods (such as the Runge–Kutta methods).

Both the exponential and logistic growth can be applied to a variety of different scenarios, some of which are not related to the study of epidemics. In fact, they were originally designed to model the growth of a generic population.

In the scientific literature, there are several mathematical models that have been created specifically for the study of how diseases spread in a given population. A branch of them models are called compartmental models, as they divide the general population into different groups called or compartments (and assuming no new people are born or can enter into the system).

One of the most simple compartmental models is called SIR, from the initials of the three groups it models: susceptible, infected and recovered people. The idea is that, at time

, all people are susceptible to an infection. Among people in this group, a given infection can spread following an exponential growth. The infection can lead to two outcomes: recovery or death. In both cases, a person cannot contract the infection twice; in one case because they gain immunity, in another because they are dead. This is why this group is referred to as removed: because they do not play a role anymore to the spread of the disease. Resistant is another term that is often seen in the literature. The model was originally developed by William Ogilvy Kermack and Anderson Gray McKendrick in 1927, but gained popularity only in 1979.

The SIR model is often indicated using the following notation, which explains the journey of a person from the different compartments:

The purpose of a SIR model is to find a series of equations to calculate, at a specific time

, how many people are in each compartment. So, a SIR model aims to find a definition for

They are best defined as a series of differential equations:

If we want to be more precise, we can also indicate on the arrows the parameters that control the flow between different compartments:

Below, you can find an interactive tool to simulate the evolution of a SIR model. It is based directly on the differential equations presented in (12).

The chart above uses Hans Nesse‘s implementation of the Runge-Kutta method.

There are several other models available, which include different compartments. A simpler one is the SIS model, which includes the possibility for people of being reinfected.

A more complex one, SEIRS, contemplates the possibility who have been exposed to the disease but are not infectious yet. This compartment is referred to as exposed:

The first article in this online course about epidemics explored how Mathematicians and Data Scientists model them using differential equations. The exponential and logistic growth curves were introduced, followed by the compartmental models. Among the latter, the SIR model is one of the most popular.

The next article, Simulating Epidemics, will move away from the mathematical formulation of epidemics, to focus on a more programmatical and flexible approach.