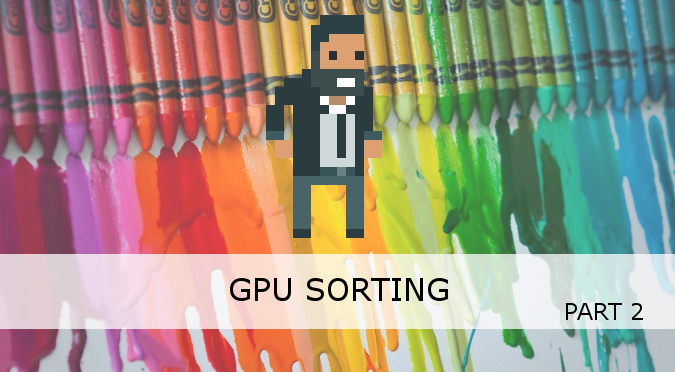 You can find a link to download the Unity source code at the end of this tutorial.

In the previous part of this tutorial, we have discussed the limitations that we face when working in a parallel environment. Conceptually, the same shader code is executed on each pixel of a texture at the same time. While this is not necessarily what happens on a GPU, we cannot rely on the traditional assumptions that we take for granted on sequential machines.

The previous post introduced the odd-even sort, which is one of the simplest sorting algorithms that can be implemented on a GPU. It works by dividing the grouping the pixels on each line of a texture in groups of two. Each one is called a swap couple, and the shader swaps them if they are not already in order. The next step shifts the swap couples, and the process repeats. You can see this in the diagram below:

As discussed before, the complexity of this algorithm is

, since it takes at most

shader passes to sort an image of

Shaders are usually used to process an input textures. Their result is visualised on the screen, leaving the original textures unaffected. What we want to do here is different, since we need the shader to keep iterating on the same texture. We have discussed how to do this extensive a previous series called How to Use Shaders for Simulations.

The idea behind this is to create two render textures, which are special textures amenable to shader manipulation. The diagram below shows how this process works.

The two render textures are cyclically swapped the shader pass can always use the previous one as the input and the other ones as the ouput.

This tutorial relies on the very implementation presented in How to Use Shaders for Simulations. If you have not read that tutorial yet, fear not. While we will focus on the sorting algorithm only, this is all you need to know:


The fragment function of the shader will contain the sorting code. The variable uv indicates the UV coordinates of the current pixel being drawn, while s represents the size of a pixel in UV space.

In the previous part, we have introduced the concept swap couple. Pixels are grouped in couples, which are then sorted in a single shader pass. Let’s imagine having two nearby pixels, which colours

represents two numbers. The shader pass has to sample these two pixels and reorder them accordingly.

To do so, the pixel on the left side of the swap couple will sample the two pixels above, and pick

as its final colour. The pixel on the right will do the opposite: 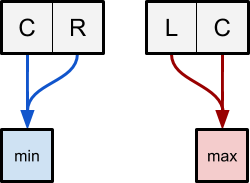 
On top of that, the min and max pixels are swapped after each iteration. The diagram below shows which pixels perform a min operation (blue) and which one performs a max operation (red):

The two determinant factors in deciding which operation to perform are the iteration number _Iteration and the element index x  (or y, if we are sorting columns instead of rows).

By looking at the diagram above, we can derive the final condition that determines whether we have to perform a min or max operation:

For this effect to work, both render textures must be set to Clamp, as the shader code does not have any boundary conditions to prevent accessing pixels outside the texure.

You can find more sorting animations in this gallery:

Become a Patron!
You can download all the assets necessary to reproduce a GPU sorting shader. There are two downloads available: