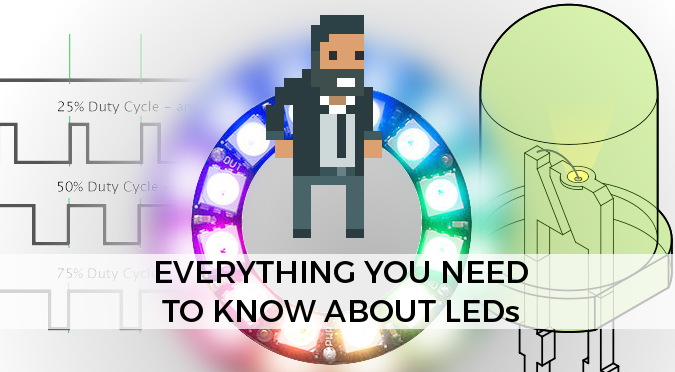 Many game developers are easily scared by electronics. Even if Arduino has shifted most of the workload on its software side, there are applications which still need a good knowledge of circuitry.  This post will teach how to use LEDs, from the most basic model to the most advanced one:

LEDs are perfect for creative projects, and they can be also be used to create entire games, such as the mesmerising Line Wobbler.

This post belongs to a series of tutorials aiming to teach game developers how to build their own alternative game controllers:

LED is the acronym for Light-Emitting Diode. As the name suggests, it is a component that emits light. The term diode indicates an electric component which allows current to flow only in one direction. Hence, all diodes have a polarity, meaning that they have a positive (anode) and a negative (cathode) side. An LED is generally used in forward bias condition, meaning that its positive side is attached to the positive side of the circuit. In order to work, the LED requires a certain voltage which is referred as forward voltage or

. If less voltage is provided, the LED won’t allow current to flow, hence interrupting the circuit like an open switch. As soon as the right voltage is applied, current starts flowing. The LED will draw all the current it receives, converting it into light. Each LED has a value called forward current, or

, which refers to the nominal amount of current it should receive. A standard red, orange or yellow LED are typically rated for 2.0V at 20mA. Before using a new LED you should always check its specifications: both forward voltage and forward current can be found in its datasheet and they typically look like this:

As mentioned in the previous section, LEDs draw all the current they receive. Unless you provide a way to limit this amount, it’s very likely any LED will burn when connected to a battery. This is why LEDs are commonly coupled with resistors, which allows to regulate the amount of current received. Is important to pick a resistor which will ensure that only an amount of current equal to

is going through the LED. Ohm’s Law relates current, voltage and resistance as

, and it can be used to find the right resistors. We know the voltage remaining in the circuit  after the activation of the LED, which is

. We also know the current that we need.

, which has to be expressed in Amperes rather  than milliAmperes:

. Now, the only remaining thing is to apply Ohm’s Law. If we assume the LED is going to be powered by an Arduino,

You can refer to the following table to know which resistor you should use:

For more complicates circuits, you can also refer to this LED calculator.

Basic LEDs usually come in a transparent epoxy case, which also works as a lens. The positive side, called anode, is recognisable because is connected to a longer pin. Alternatively, the cathode side of the LED is always flat. 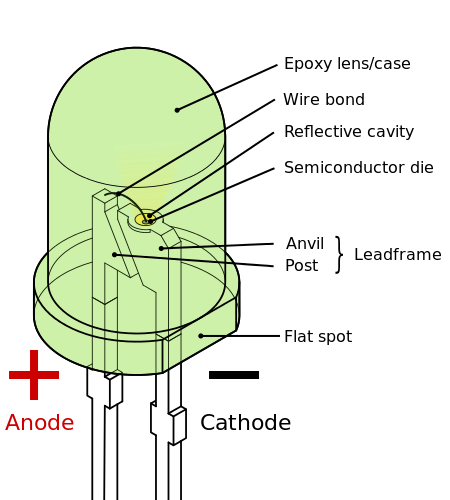 Once you have identified the positive and negative sides, you can attach it to an Arduino Uno, providing that you have the right resistor. 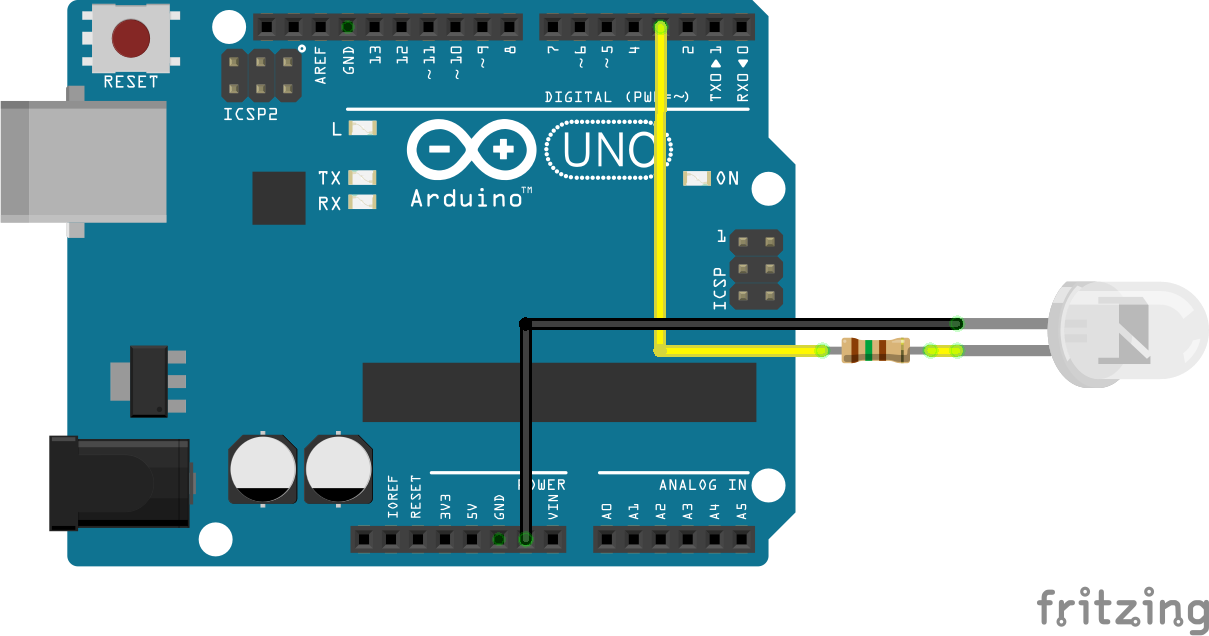 By connecting your LED to the 5V output, it will always be on. If you want to be able to turn it on and off, you should attach it to a pin and use digitalWrite to write HIGH or LOW to it. The following code is taken from the Blink sketch from Arduino:

Colour is not the only thing you should look for when buying LEDs. The brightness, for instance, is a very important parameter. Typical LEDs are rated 20mA, while very bright ones tend to be rated at 50mA or 100mA.

As a general rule, is safe to provide less current than the one indicated in

. This often causes the LED to shine less, but is hard to control. If you want your LEDs to fade reliably, there is another technique called pulse width modulation. Arduino has a function called analogWrite, which is used to output square waves made alternating LOW and HIGH voltages. The period of a square wave in Arduino, also called duty cycle, is approximately 2ms, meaning that Arduino has a frequency of 500Hz. The parameter provided to analogWrite determines how much time of the duty cycle is spent outputting a HIGH value.

When analogWrite is used on an LED, it turns it on and off very fast. The human eye cannot refresh fast enough to see the LED blinking at 500Hz, so the duty cycle is perceived as a difference in brightness. Arduino comes with a sketch called Fade which uses PWM to fade an LED in and out:

PWM is the standard way used to change the brightness of LEDs in Arduino, but is only available on certain pins. The ones which can be used for PWM have a tilde next to them.

The actual components that emits light inside an LED is tiny. So tiny that there are components which can fit three of them in the same space. The most commonly used is the RGB LED, which has four pins. One is a shared ground, while the other three drive the R, G, and B components. They are, de-fact, three independent LEDs and requires three different PWM pins to be controlled. Each one requires its own resistor. 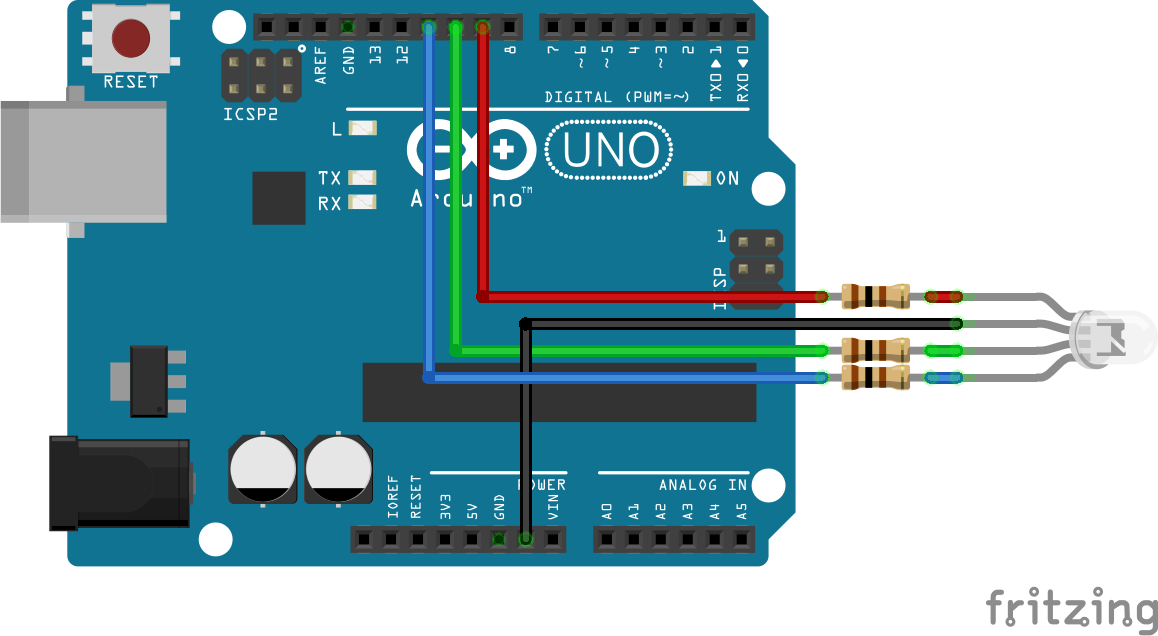 The problem with RGB LEDs is that each one of them requires three PMW pins. Arduino Uno as only six, meaning that only two RGB LEDs can actually be used at the same time. If you want to connected dozens or hundreds of RGB LEDs, another approach is needed. Adafruit has created NeoPixel strip, which requires only three pins to drive several individual RGB LEDs. Using NeoPixels is a little bit more complicated. 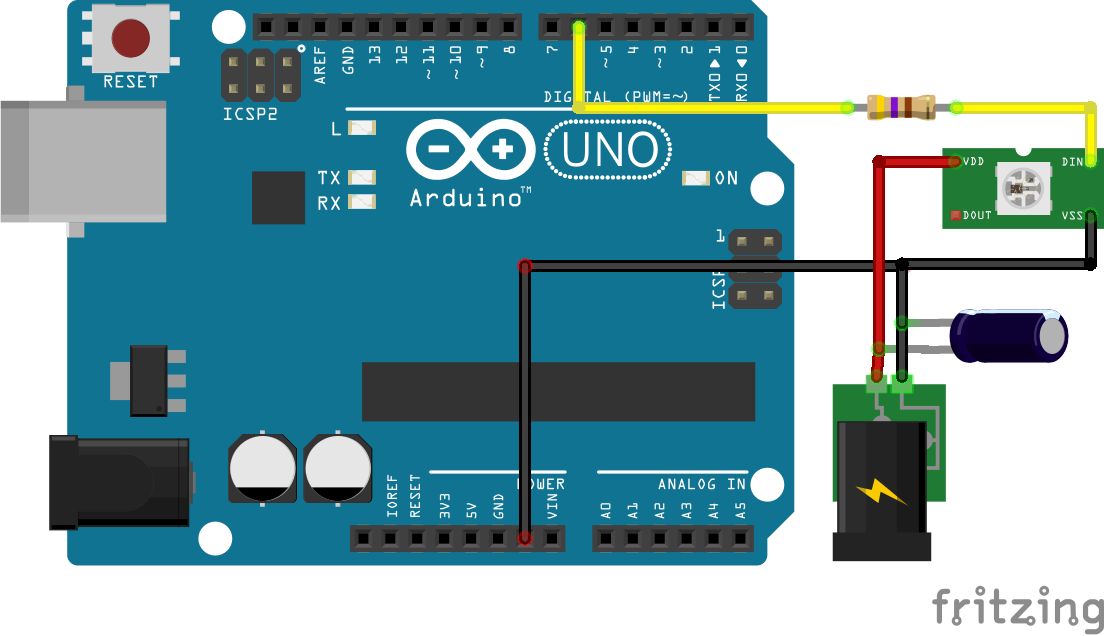 NeoPixels are a rather sophisticated piece of technology. On the Adafruit website you can find more information how to use them.

The LEDs used in Adafruit components looks very different from the ones presented in the previous sections. They are often called SMD LEDs, which stands for Surface Mounted Device.