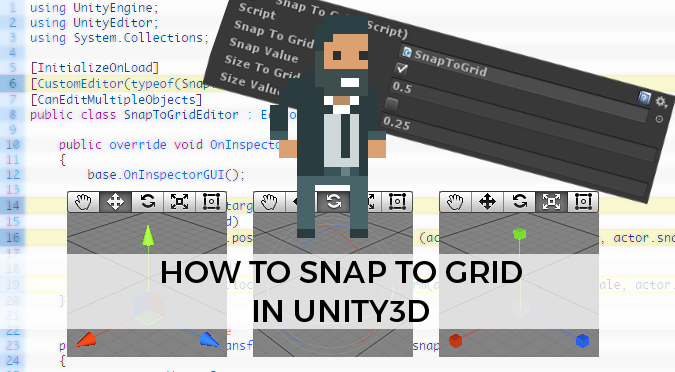 Despite Unity3D being such an advanced framework, I am sometimes puzzled by its lack of basic features. Especially when working with 2D games, the lack of a proper snap to grid option is simply crazy. Luckily, Unity3D allows to extend its basic interface to add new behaviours. This post will explain how to add a customisable snap to grid option to your objects. Two different implementations are presented; the first one, despite being more complicated, could be used a good starting point to further extend and customise the inspector.

Broadly speaking, the idea is to create a script which will force the position of the GameObject it’s attached to stick to integer multiples of a certain value. The twist is that we want this script to be executed only in the editor and to not cause any overhead during the execution of the game.

The first step is to create a MonoBehaviour which is, de facto, doing nothing. It’s purpose is to help us configuring the snap properties for the GameObject it will be attached to.

As you can notice, this script will be able to snap not just the position, but also the size of its GameObject. Line 5 and line 11 makes these variables disappearing during the actual compilation of the game. By doing this, any release version will only have an empty script attached, causing little to no overhead.

Line 6 indicates that SnapToGridEditor should affect all the MonoBehaviours of SnapToGrid type. Unity will then execute OnInspectorGUI every time the inspector of a SnapToGrid script is selected. Line 14 is where the SnapToGrid script is accessed. Lines 23-31 changes a Vector3 according to the desired snap value; these scripts are intended for 2D, so that’s why the Z axis is never changed.

For something as simple as adding snap to grid behaviour to your GameObjects, you could actually implement everything directly in the Update function of SnapToGrid.

Line 5 is necessary, since it will enable the script to be executed in the editor, while the game is not actually running.

Having scripts and editor scripts is quite a common pattern you’ll see in Unity3D. Such a separation allows also to change the appearance of the editor. This is particularly interesting if you need to add buttons or other custom behaviours to the inspector panel. As it often happens in Unity3D, there isn’t a single way to implement a feature. Another snap to grid script can be found here. For a guide oriented to Unity2D and snap to pixel, you can consult this link.