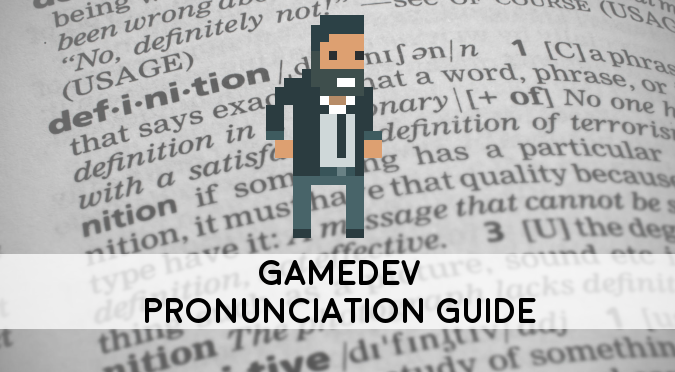 If you are working in the field of Computer Science, chances are you might have encountered quite a lot of technical terms and foreign names, such as Dijkstra and Nyquist. And chances are that you have learnt a good part of them solely from books. And there is nothing more embarrassing than being in an interview and mispronouncing some key term in your field of expertise! Learning the correct pronunciation is also an act of respect towards the many men and women which dedication has become the foundation of our daily work.

This page is a collection of some of the most used—and tricky to pronounce—terms and names from Computer Science, with a focus on Game Development and Computer Graphics. For each term, you can find the “most correct” pronunciation using the International Phonetic Alphabet. For many others, you will also find the respective phonetic respelling used by Wikipedia.

Before you keep reading, there are a few points to keep in mind. Many of the names in this list are in foreign languages, and they cannot be pronounced “the correct way” in English. They have, however, an Anglicised version that makes use of the closest sounds found in the English language. Fourier, for instance, is pronounced [fuʁje] in French, but is often approximated in English as /ˈfʊrieɪ,/ (FOOR-ee-ey). Yet, another commonly accepted variations is /ˈfʊriər/ (FOOR-ee-er). Many names and technical terms also variations between British English (🇬🇧) and American English (🇺🇸); effort was made to include both variants.

If you are interested to learn the pronunciation of technical terms, Computational Graphics Pronunciation Guide is another good resource. I hope you will find this collection useful, and feel free to get in touch to suggest a change or a new term to add.

As in: Adobe Inc., an American multinational computer software company, developer of Photoshop, Premiere Pro and After Effects.

From Pierre Étienne Bézier, a French engineer and one of the founders of the fields of solid, geometric and physical modelling as well as in the field of representing curves.

James F. Blinn is an American computer scientist who first became widely known for his work as a computer graphics expert.

Bui Tuong Phong (Anglicised version of Bùi Tường Phong, (🇻🇳) [fawŋ͡m˧˧]), was a Vietnamese-born computer graphics researcher and pioneer. Many of his publications refer to him as Bui (his family name) although his work his remembered using is given name, Phong, as it is tradition in Vietnam.

From George Boole (/buːl/), a largely self-taught English mathematician, philosopher and logician, most of whose short career was spent as the first professor of mathematics at Queen’s College, Cork in Ireland.

In the C programming language, the ++ notation indicates an increment of one; this reflects that C++ is an evolution of C.

The name C# is inspired by music notation, where whereby a sharp symbol (♯) indicates that the written note should be made a semitone higher in pitch. Due to technical limitations of display, the number sign (#) is used instead.

The word cartesian from from Renatus Cartesius (/karˈte.si.us/), the Latinised name of French-born philosopher and Mathematician René Descartes [ʁəne dekaʁt].

From, Boris Nikolaevich Delaunay (or Delone) (Бори́с Никола́евич Делоне́), one of the first Russian mountain climbers and a Soviet/Russian mathematician,

The Cyrillic for “Delone” is pronounced the same way as “Delaunay”, which is why that spelling is often used instead.

Some resources incorrectly attributes the Delaunay triangulation to the French astronomer Charles-Eugene Delaunay.

Euclid is the anglicised version of the Ancient Greek name Εὐκλείδης (Eukleídēs).

From Euclid, s a Greek mathematician, often referred to as the “founder of geometry”.

From Leonhard Euler (/leːɔnhart/), a Swiss mathematician, physicist, astronomer, geographer, logician and engineer who made important and influential discoveries in many branches of mathematics.

From Jean-Baptiste Joseph Fourier, a French mathematician and physicist born in Auxerre.

From Augustin-Jean Fresnel, a French civil engineer and physicist whose research in optics led to the almost unanimous acceptance of the wave theory of light.

From Johann Carl Friedrich Gauss (Gauß), a German mathematician and physicist who made significant contributions to many fields in mathematics and science.

Steve Wilhite, the inventor of the GIF format in 1987, says that it was originally pronounced with /dʒ/ and that such pronunciation is “correct”, but the pronunciation with /ɡ/ is also widespread.

From Johann Heinrich Lambert (Jean-Henri Lambert, in French), a Swiss polymath who made important contributions to the subjects of mathematics, physics (particularly optics), philosophy, astronomy and map projections.

From Pierre-Simon, marquis de Laplace [pjɛʁ simɔ̃ laplas], a French scholar and polymath whose work was important to the development of engineering, mathematics, statistics, physics, astronomy, and philosophy.

From Latin: to give a game.

The term originates from moire (moiré in its French adjectival form), a type of textile, traditionally of silk but now also of cotton or synthetic fiber, with a rippled or “watered” appearance.

From Harry Nyquist, a Swedish electronic engineer who made important contributions to communication theory.

Pythagoras is the anglicised version of the Ancient Greek name Πῡθαγόρᾱς (Pūthagórās).

From John William Strutt, 3rd Baron Rayleigh (12 November 1842 – 30 June 1919), a British scientist who made extensive contributions to both theoretical and experimental physics.

Jon von Neumann was born in Hungary as Neumann János Lajos. He later Germanised his name by adding the von to indicate nobility.

von is typically written lowercase; it can be capitalised as Von when used at the beginning of a sentence.