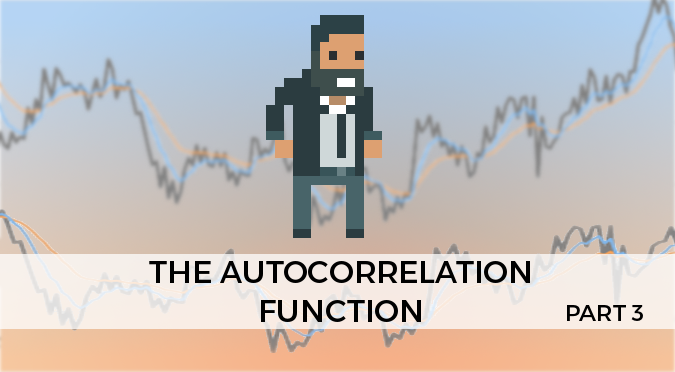 The purpose of this tutorial is to show a simple technique to estimate periodicity in time series, called autocorrelation.

This tutorial is part of a longer series that focuses on how to analyse time series.

In the previous part of this tutorial, Time Series Decomposition, we have seen how is possible to decompose sales in their original components. One of the inputs of this process, is knowing the exact periodicity of the seasonal components. When it comes to real data, this is rarely the case.

The first step is to find a way of measuring how similar two time series are. There are countless way of doing this, depending on the underlying assumptions of your data. The most used one for those applications is called correlation. The correlation between two functions (or time series) is a measure of how similarly they behave. It can be expressed as:

being the standard deviation and the mean of

The mean is simply the average of the whole time series. The standard deviation, instead, indicates how much the points of the series tends distance themselves from the mean. This quantity is often associated with variance, defined as:

When the variance is zero, all the points in the series are equal to the mean. A high variance indicates that the points are scattered around.

represents the covariance between

and is easy to see that indeed

Looking back to the definition of correlation, it is now easy to understand what is trying to capture. It’s a measure of how similarly

behave, normalised by their variance to obtain a value between

The first step is to define an operator to shift a time series in time, causing a delay of

. This is known as the lag operator:

The autocorrelation of a time series with lag

which can also be expressed as:

The above mentioned form is amenable to be written as code. The easiest function is surely the one that calculates the mean of a time series:

A little bit complicates is the case for the autocorrelation function. It creates an array which will contain the final result. Each t-th element contains

are present, since the function repeat itself after that point.

Line 14 implements an inline lag operator. It shifts i by t, and uses the modulo operator so that the time series loops. If this is not the desired case, then you should only loop up to x.length -t.

Autocorrelation is a relatively robust technique, which doesn’t come with strong assumptions on how the data has been created. If in the previous post we have used a synthetic sales data, this time we can confidently use real analytics:

This is the plot for the autocorrelation function, also known as correlogram:

; this is because when

, we are comparing the time series with itself. The next clear peak in the correlogram appears at

. This indicates that the data has a weekly periodicity. If a distribution has a component of period

, its correlogram will show peaks for each

. This is indeed the case, and strengthen the idea that the weekly periodicity is not just a statistical coincidence.

Because of this resonance, interpreting correlograms is not always easy. There are several improvements on this technique which can help to extract actual cycles. Partial autocorrelation functions controls for the values of the time series at all shorter lags. This removes interference and resonance with multiple cycles, highlighting a more clear periodicity. A more advanced technique, called Power Spectral Density, performs a Fourier analysis on the correlogram to find its main component.

This tutorial concludes the series on time series analysis. We have explored valuable techniques to extract information from temporal data, focusing on their potential and limitations.