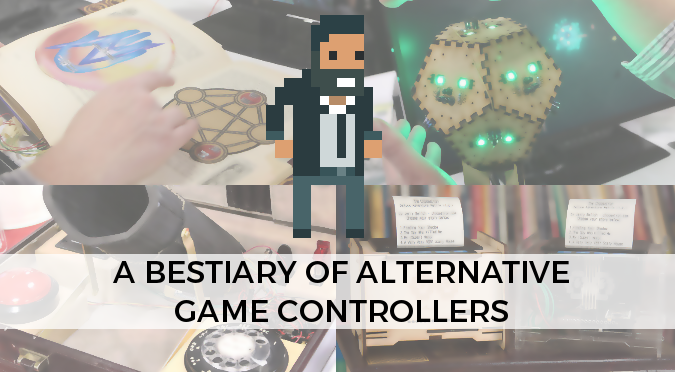 Many game developers are suspicious about alternative controllers, believing that since they can’t be easily mass produced, they are useless. Well, this is the story of how an Arduino got me to San Francisco for free. Twice.

END_OF_DOCUMENT_TOKEN_TO_BE_REPLACED

It’s not uncommon for games to have a visual style which is not directly related to their gameplay. In these three games, instead, graphics and gameplay entangles to create beautiful, aesthetic driven experiences.

If there’s a game which is pushing the concept of aesthetic to the limit, that’s for sure Memory of a Broken Dimension. The game seems coming out of a corrupted VHS tape, with compression artefacts are all around you. So much effort has been channel into the making of this game that it’s not hard to understand why it was one of the IGF finalists for Excellence in Visual Arts. On top of that, Memory of a Broken Dimension cleverly mixes 3D environments with DOS-like shells. While at GDC, I met Ezra and player the game for few minutes. It’s not just visually stunning: it’s also very innovative. Part of the game plays on the concept of perspective. Is hard to tell more about Memory of a Broken Dimension because not much has been revealed. While waiting for the game to come out, you can play a prototype version on itch.io.

END_OF_DOCUMENT_TOKEN_TO_BE_REPLACED

One of my most important design principles is elegance. And I cannot think about any other game which beautifully achieves it such as Mini Metro. Initially developed during Ludum Dare, the game has gone a long way. Yet, it has always remained faithful both to its mechanic and its style. Mini Metro really has, in a nutshell, everything a 2D game can ask for. Including one of the highest score on Steam and and audio experience designed by Disasterpeace. Now the real question: why didn’t I thought about something so simple and ingenious myself? :p