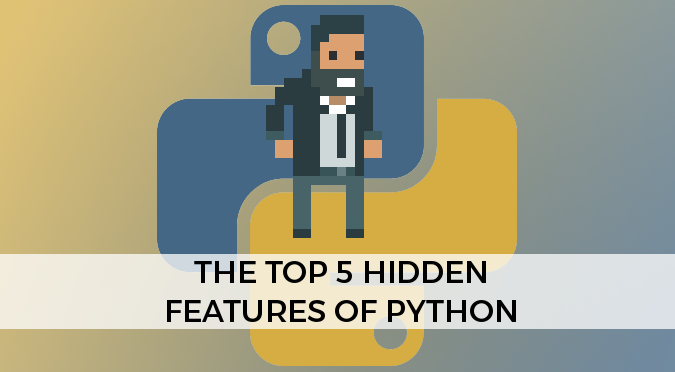 Python aims to be an elegant and expressive language; this post includes its top 5 hidden features:

The term hidden is loosely used to indicate features which are generally unique to Python, or not very well known. I covered the most interesting Easter eggs which are really hidden in Python in this post.

Python has the ability to slice list using the [start:end] notation. Given a list a, a[start:end] returns the sublist from the start-th to the end-th element.

Python allows to omit end to indicate the last element:

You can also omit start, which is equivalent to use 0 instead:

One of the most annoying things when it comes to lists and arrays is to work with their last elements. Python allows to use negative indices, which behaves exactly like positive ones but on the right side:

For loops are often used to search for a specific element within a list. When this is the case, a flag is usually used to indicate if it has been found or not:


Python offers the for…else construct, which replaces the code above with the more expressive:

The else statement is executed if the loop has been completed without ever invoking break.

In Python there is the concept of iterator. Lists, strings and ranges are all iterators. They allows to drive for loops, such as:

Technically speaking, they are classes which:

For instance, the following class is an iterator that counts up to a certain value:

As you can see, iterators are extremely tedious to create; something as easy as counting to n suddenly requires dozens of lines of code. Generators are the solution to this problem: they are methods which invoke the yield statement. The same class can be rewritten as a generator like this:

Both iterators and generators can be used in for loops and other functions which takes sequences:

Languages such as C and Java only support single assignment. One variable equal one vale. Python allows to have multiple assignments on the same line.

This also allows for the infamous in-line swap:

List unpacking fails when used on a function; Python doesn’t natively unpack a list or a tuple when is passed to a function. This is because it may cause ambiguity: it’s up to the developer to specify when this has to be done. For instance:

is equivalent to the more compact:

The magic is done by the star operator. Python also has the double star operator, which is used to semantically unpack dictionaries: