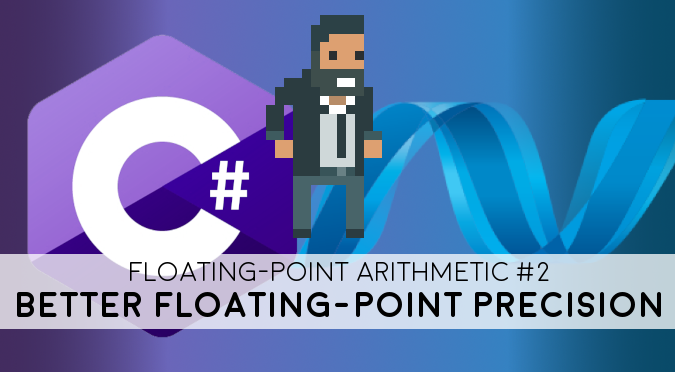 This tutorial continues the journey to understand floating-point arithmetic, and how to improve the precision of modern programming language types.

At the end of this article, you will find a link to download a simple C# library that provides a new type which improves the precision of traditional float and double variables.

The main issue arises from the fact that real numbers (which are potentially unbounded) need to be stored in a finite amount of memory. Floating-point representation allows to store small numbers very precisely, or large numbers with very low precision. Generally speaking, you cannot have both.

Libraries that allow performing computation without any rounding error do exist, but they tend to be fairly slow. This is mostly because most processors have built-in operations to perform floating-point arithmetic, at a speed that cannot be matched by any other software technique.

A good compromise that is often used is to use multiple floating-point numbers to store an even larger number. In this article, we will highlight how to exactly this, by using one number for the integer part, and another one number for the decimal one.

The idea is simple: any number

can be decomposed as the sum of its integer and its fractional parts, which we will call

This can be easily implemented in C# using a struct:


In the snipped above, the integer part is defined as double, while the fractional as decimal. This is because decimals are designed to have a higher precision compared to doubles (which is why they are often used for financial transactions).

We can also easily create a constructor that converts any existing double into a Quad:


The cast to decimal is necessary; decimals have higher precision compared to floats, but they can store smaller numbers overall. In this case, the case is technically safe, since we are only interested in the decimal part of the expression.

To make this a “proper” new type, we should ensure that it can be used pretty much as other floating-point types can. This means:

Casts to and from other types

To make the Quad type more usable, it is important that it can be used pretty much as all of the other floating-point types can. This means being able to implicitly cast other types to Quad—whenever it is safe to do so—, and forcing an explicit cast to convert a Quad into a smaller type.

This is very easy in C#, thanks to the implicit operator keyword:


The method above is called every time a double is assigned to a Quad. As the name suggests, the cast happens implicitly, meaning that this method is behind called to construct a Quad from a double.

We can use a slightly different variant of this method to do the opposite: constructing a double from a Quad. This can be done with the explicit operator keyword, which requires an explicit cast to the destination type.


C# typically requires explicit casting every time an assignment could potentially cause a loss of precision (like in this case).

The implementation for the other four operators is omitted from the article, but is included in the library you can download at the end of the page.

The next step is to make sure that Quad variables support all basic operations. Let’s start with implementing the addition. C# allows defining how the + operator should work when used with two Quad s variables, through a feature called operator overloading:


What is now needed is to write the code to add two Quad variables.

As previously discussed, adding numbers that are wildly different in range can lead to floating-point errors. The safest and simplest option here is summing up two Quads components by components:


This works, but leads to a problem: the fractional part can potentially go above one. For instance, if

, the fractional part would be

While summing two integers is guaranteed to produce another integer, that is not necessarily the case for fractions. When that occurs, we need to carry the integer remainder from the fractional part to the integer one.

We can take care of this with a method that re-normalises the Quad:


If we ensure that Normalise is called before operator+ returns, we have successfully implemented addition between two Quad variables.

Another important feature is to ensure that Quad variables can be compared to each other.  In C# this can be done by implementing the IComparable<Quad> interface.


It is good practice to also overload the >, <, >= and <= operators, as seen in the IComparable<T> interface page on the .NET documentation:

Even though we have only implemented comparison between two Quad variables, we are able to perform comparisons with other floating-point types as well. This is because we have instructed the compiler that floats and doubles can be implicitly cast to Quads.

Another step that needs to be taken is to make sure we can use == to check whether or not two Quads are the same. Like before, this can be done by overloading the == operator, and by implementing the IEquetable<Quad> interface.

However, this is not strictly necessary. By default, using the == operator with two structs of the same type in C# has the behaviour of comparing all of their fields. This is doing through reflection, which can be quite slow. So it is always best to re-implement a more efficient version by hand:


Overloading the == operator also requires to overload !=. And it is good practice to also override the Equals method inherited from the Object class.

When Equals is changed, you should also override the GetHashCode, which is used by many .NET libraries such as Dictionary and HashSet.

This leads to the rather unpleasant situation where, for something as simple as the Quad type, you end up having to add at least ten (TEN!) methods just to get comparisons and equality to work properly.

At the beginning of this article, we justified the need for a more precise floating-point variable with the example of a gravity simulator. If we really are to use Quad variables in a simulator of that kind, we do need a way to handle trigonometric functions.

To get the sine of a Quad, we could simply do this:


However, this is basically killing the precision we so spent so much time preserving. A better way would be to calculate the sine on the integer and fractional parts separately, and then to join them later. This is a good ideal, but is not as straightforward as it might sound. The reason is simple: trigonometric functions are not linear. In fact, the sine of the sum is not the sum of the sines; quite the opposite:


There are a few drawbacks, however. First, the lack of trigonometric functions that operate on decimal variables. Currently, the Math library can only handle doubles. 🔍 Difference between Quad and double-double
The idea to mitigate the limitations of doubles by using several of them is nothing new. It is possible to use two double variables to implement what is often referred to as double-double arithmetic.

What we have created here, however, is a bit different. A true double-double type would be able to make full use of all of its bits. Our Quad, instead, cannot do that. When the number is below

, a Quad simply breaks down to a decimal. In a sense, this new type shares many similarities with fixed-point numbers.

While true double-double types can certainly be made in C#, they are not as easy to implement. The solution presented here works relatively well and—even more importantly— has a great educational value. And I am confident that after reading this tutorial, you know have the basis to go even beyond and use nor just two, but three variables, shall you need to.

This post concludes the two-part tutorial on floating-point arithmetic in C#.

You can download the C# Quad library on Patreon. It is available fully compatible with Unity.