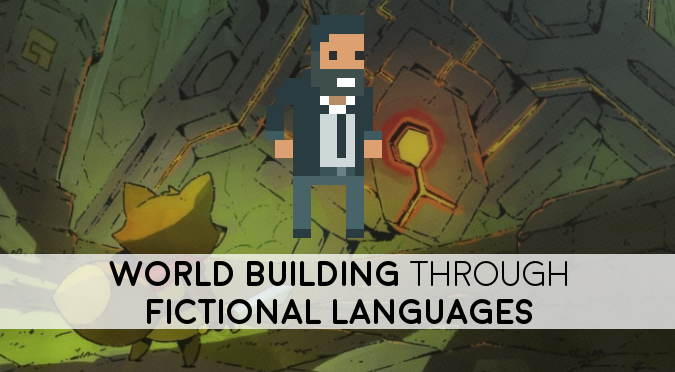 Every serious game developer knows that world building is an integral part of the process that creates a truly immersive experience. There are a variety of techniques that can be used to achieve this: from presenting the backstory of your player with a wall of text, to clever level design tricks known as environmental storytelling. The latter is often preferred. Unravelling the lore of your world from a few hints scattered across the levels is, de-facto, a game within the game. And while most players might just ignore them, others could find great pleasure in resolving this meta-puzzle.

Games like Dark Souls are notorious for their rich—and somewhat obscure—lore, which can be pieced together through the strong environmental storytelling and the various hints hidden in the item descriptions. Other games go even deeper than that, and create entire new languages for their fictional civilisations.

This is not something so uncommon, and many other media before games have long relied on fictional languages to create a much deeper sense of immersion. The entire world of The Lord of the Rings was built around a series of languages that J. R. R. Tolkien himself created before writing the books.

🇷🇺 A Russian version of this article is available here.