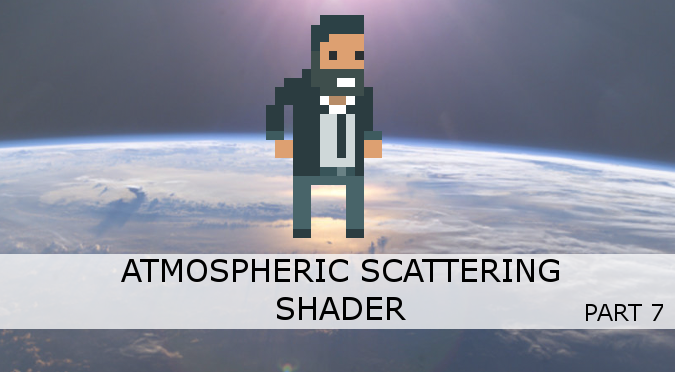 This tutorial finally concludes our journey to simulate Rayleigh Scattering for a planet’s atmosphere.

The next (and final) part will show how to change the shader to also include an additional type of scattering, known as Mie Scattering.

Let’s recall the equation for the atmospheric scattering that we have recently derived:

, multiplied by the sum of the individual contributions from each point

We could go one and implement that function directly in our shader. However, there are few optimisations that can be done. It was hinted, in a previous tutorial, that the expression could be simplified even further. The first step we can take is to decompose the scattering function into its two basic components:

and the scattering coefficient at sea level

are constant with respects to the summation, since the angle

do not depend on the sampled point. Hence, they can be factored out:

This new expression is mathematically equivalent to the previous one, but is more efficient to calculate since some of the most heavy parts have been taken out of the summation.

We are not ready to start implementing it. There are infinitely many points

we should take into account. A reasonable approximation to

into several smaller segments of length

, and to accumulate the contribution of each individual segment. In doing so, we assume that each segment is small enough to have a constant density. Generally speaking, that is not the case, but if the

is small enough, we can still reach a reasonably good approximation.

The number of segments in

is referred to as the view samples, since all segments lie on the view ray. In the shader, this will be the _ViewSamples property. By having it as a property, it is accessible from the material inspector. This allows us to reduce the precision of the shader, in favour of its performance.

The following piece of code allows looping through all the segments in the atmosphere.

, and is incremented by ds after each iteration.

Each point along the view ray

brings its own contribution to the final colour of the pixel that we are drawing. That contribution is, mathematically speaking, the quantity inside the summation:

Like we did in the previous paragraph, let’s try to simplify it. We can expand the expression above even further, by replacing

with its actual definition:

The product of the transmittance over

), multiplied by the scattering coefficient at sea level (

, which goes from the point of entry through the atmosphere, up to the point we are currently sampling in the for loop. Let’s recall the definition of optical depth:

If one had to implement this naively, we would create a function called opticalDepth that samples points between

in a loop. This is possible, but very inefficient. As a matter of fact,

, we see that the only quantity needed is the optical depth of the segment

into a function called lightSampling. The name comes from the light ray, which is the segment that starts at

and is directed towards the sun. We have called the point where it exits the atmosphere is

The  lightSampling function, however, will not just calculate the optical depth of

. So far we have only considered the contribution of the atmosphere, ignoring the role of the actual planet. Our equations do not account for the possibility that the light ray that goes from

towards the sun might hit the planet. If this happens, all calculations done so far must be discarded, as no light would actually reach the camera.

In the diagram above, it’s easy to see that the light contribution of

should be ignored, since no sun light is reaching

. While looping through the points in between

, the  lightSampling function will also check if the planet has been hit. This can be done by checking if the altitude of a point is negative.

The function above first calculates the point

using rayInstersect. It then divides the segment

into _LightSamples segments of length ds. The calculation for the optical depth is the same used in the outermost loop.

The function returns false if the planet has been hit. We can use this to update the missing code the outermost loop, replacing the  ....

Now that we have taken into account all the elements, our shader is complete.

This post (finally!) completes the volumetric shader that simulates atmospheric scattering. So far, we have only taken into account the contribution of the Rayleigh scattering. There are many optical phenomena that cannot be explained with Rayleigh scattering alone. The next post will introduce a second type of scattering, which is known as Mie scattering.