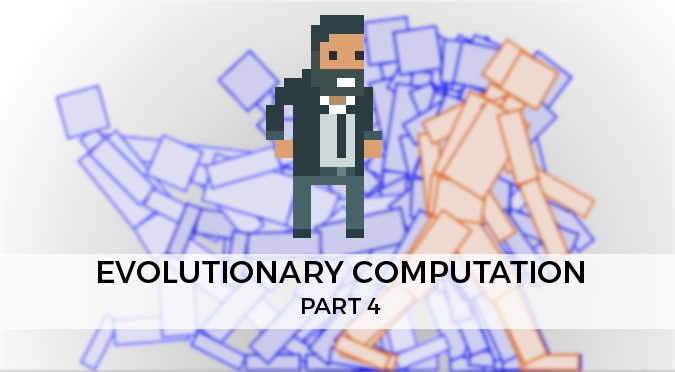 Our journey to harness the power of evolution is coming to an end. In the previous three parts of this tutorial we have constructed a bipedal body and a mutable genome that determines its behaviour. What’s left now is to actually implement the evolutionary computation that will find a successful walking strategy.

Evolution is an iterative process. We will use a coroutine to ensure such a loop continues. In a nutshell, we start with a specific genome and make several mutated copies. We instantiate a creature for each copy and test its performance in a simulation. Then, we take the genome of the most performing creature, and iterate again.

To test how well a creature can actually walk, we need to create its body and to give it enough time to move. To simply things, let’s imagine that we have a sufficiently long floor in the game scene. We will instantiate creatures on top of it, at a sufficient distance from each other to avoid interferences. The code below does exactly this, spacing each creature (stored in prefab) by distance.

The function CreateCreatures keeps track of all the creatures that have been created, so that they can be easily manipulated. For a better control, we disable in the creature prefab the script Creature. This prevents the creature from moving. We can then start and stop the simulation with the following functions.

Evolution is all about fitness evaluation. Once the simulation is over, we loop over all the creatures and get their final score. We keep track of the best one, so that we can mutate it in the next iteration.

A careful reader might have noticed that the technique described in this tutorial relied on few parameters. Namely: generations , simulationTime and variations. They represents, respectively, the number of generation to simulates, the duration of each simulation and the number of variations to generate ad each generation. A more careful reader, however, should have noticed that the strategy adopted is poisoned with hidden assumptions. They are the result of oversimplified design choices that have been made, and that are now becoming hard constraints. They will make the difference between a program that runs in one hour, and one that runs in one month. This section will try to address some of these constraints, providing more sensible alternatives that you can implement on your own.

This tutorial has introduced and explained how evolutionary computation works. This topic is incredibly vast, so please take this as a general introduction.

You can download the complete Unity package for this project here. If you think this tutorial has helped you, please consider supporting me on Patreon.