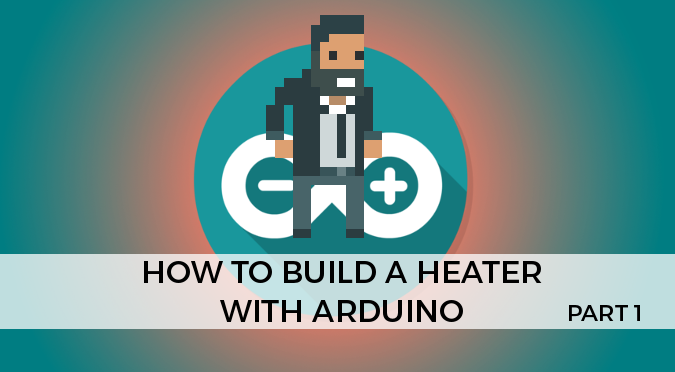 This tutorial will explain how to build a portable heating device with Arduino. If you’re an amateur astronomer, this can be the perfect way to prevent the formation of dew on your mirrors and lenses. In my specific case, I’ve built one of those mini heaters to warm up a formicarium. Whether it’s for your feet or for your cold-blooded pets, building a heater is easy and cheap.

The second part of this tutorial (How to Build a Heater with Arduino – Part 2) will explain how to use a temperature sensor to maintain a desired temperature.

It’s safe to assume that we’re all familiar with electric heating devices. Whether it’s a toaster or an oven, the underlying mechanism is the same. The current drawn from the socket is somehow transformed into heat. This phenomenon occurs even in situations in which is not desirable. Your laptop, for example, can warm up significantly when is performing intensive computation. The flow of electricity seems to be somehow related to heat. As a massive oversimplification, this happens due to a property of all materials, called electrical resistance. You can imagine the resistance as an obstacle that the current has to overcome when flowing through a conductor. Resistors are electrical components designed to have a specific resistance. When attached to a battery, resistors will dissipate some of the energy they receive as heat. In a nutshell: resistors get hot. How hot they can get, mostly depends on the amount of current that flows through them.

The temperature of a resistor depends on many factors, from the room temperature to the rate at which air is flowing. The resulting increase in temperature can be hard to predict and to replicate reliably. Generally speaking, is not very useful to describe the heat produced by an electrical component in terms of degrees. What is more reliable is the amount of power that is dissipated, which is measured in Watts. But how “hot” is a Watt? The question doesn’t really make sense in its current formulation; but you can still get your head around it if you think about the following scenario. A traditional light bulb converts only 10% of the energy it receives into light; the rest is dissipated into heat. A

into heat. That is enough to make a small filament of tungsten glowing red hot.

For the purpose of this tutorial, we want to create a heater that dissipates

. Which is generally hot enough to gently warm your hands and feet. The power will come from a standard

battery. Theoretically speaking, this could be done entirely with a single resistor. What’s the necessary resistance to achieve such an effect? To calculate this we have to rely on Ohm’s and Joule’s laws. Respectively:

The first one relates the voltage of a circuit (

) to the intensity of the current (

) that goes through its resistor (

). The second one, relates the energy (

) produced with a certain voltage and current.

We can merge the two to obtain a single equation that has exactly what we need:

By plugging the values from our setup, we discover that a resistance of

is needed to dissipate

of power from a

If we decide to use a single resistor, we’re forcing it to dissipate all those 3 Watts of power. Standard resistors are usually graded for

Watts. Forcing more energy through them will cause the resistors to fail. If your component changes colour or starts smoking, you know that you’ve fried it. Overheated resistors can catch fire and even explode, so be careful.

The easiest solution to overheating is simply dissipating those

of power between multiple resistors. If only

Watts resistors are available, then we need at least

of them. It’s important to notice that this refers to the maximum power that the component can withstand before failing; if you want to be safe, you should allow for a wider margin. Running a

will dramatically reduce its lifetime. By using 12 resistors, we are sure they won’t be damaged in the long run.

We now know that we need 12 resistors, and that they have to somehow sum up to

. There are a number of ways in which this can be arranged. For instance, you can use twelve

resistors in series. Unfortunately, is unlikely you’ll find a component with such a resistance value.

Heating strips are usually made by connecting all the resistance in parallel, arranged in what is called a resistor ladder. To do this, each resistor will need

Depending on the resistors that are available to you, your setup might be slightly different. I ended up using twelve

battery has a capacity of

; meaning that it can provide

for one hour before needing to be recharged. If we draw only half the current, it will last twice as long. Looking back at Joule’s law, our setup draws

. This means that a

battery will power the heater for

, which is approximately one hour and forty minutes. The final design presented in the second part of this tutorial will last much longer, since it will power the heater only sporadically.

Working with electricity can be dangerous. When you’re sure that your design works, you can improve it by providing power from the socket. The main supply voltage in the UK is 240V; touching a bare wire can kill you. If you want to be safe and worry about about running out of power, you should connect your resistor ladder to a phone charger. Chargers are usually rater for

, capping the amount of current they can provide to

If you’re looking for a quick, plug-and-play equation, this is what you need:

The next part of this tutorial will show how to add a temperature sensor to the design to keep the temperature stable.