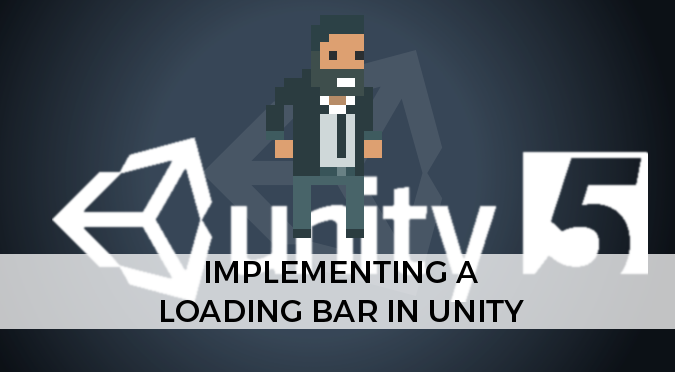 This tutorial will explain how to create a loading bar in Unity. This is the second part of a longer series on scene management.

Despite Unity’s best effort, implementing a loading bar is all but easy. The reason behind this is that the set of APIs provided heavily relies on assumptions that, at best, are a consequence of poor design choices.

Before digging into them, we need to understand what loading a level actually means for Unity. If you are used to SceneManager.LoadScene (or the now deprecated Application.LoadLevel) you might be unfamiliar with the sequence of operations that Unity performs:

The idea behind this tutorial is to delegate the loading of the new scene to Unity’s dedicated background process. We can now periodically query the state of the loading and display it on the screen. When all the assets are loaded, we can finally trigger the activation of the scene.

The function provided by Unity to load a scene in the background is SceneManager.LoadSceneAsync, which returns an instance of AsyncOperation. Asynchronous operations (documentation) are objects that can be used to query the current state of a background process. It provides three essential components:

Except that …is not that simple! Both isDone and progress suffer from heavy assumptions. Firstly, isDone becomes true when the scene is both both loaded and activated. Secondly, the range from 0 to 0.9 of progress is used for the loading part only, while 1 is reserved for the completion of the activation progress. Values from 0.9 to 1 (extremes excluded) are never used.

With all the knowledge gathered so far, we can now write a proper asynchronous function to monitor the loading of a scene. Since we are required to update the loading bar in parallel with the loading process, we need to wrap out code into a coroutine. This is simply a function that returns IEnumerator, and that signals when it can be stopped and resumed using the keyword yield. Coroutines will be explored in a further tutorial.

This code prints the current progress on the console, but it can be easily changed to update any UI you have designed.

Note: If you are to compare two floating values, it’s better to rely on Mathf.Approximately (documentation), rather than ==. This is because floating point arithmetic is prone to approximation errors. In this very specific case, however, progress is set to exactly 0.9f when the scene is loaded.

The technique explained in this tutorial works very well if you have to load a single scene at a time. There are other hidden assumptions in the Unity APIs which can cause unwanted behaviours.

The next part of this tutorial will explain how to load scene incrementally. Such a technique is essential if your world is very large and you want to create a seamless experience, free of loading bars.