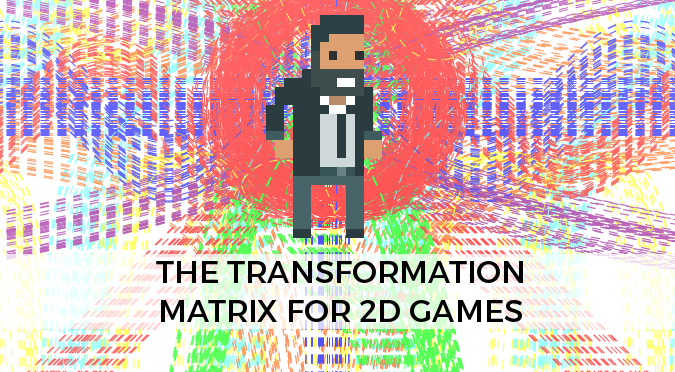 In the previous post we have seen how a 2D point

can be represented in the plane, and how trigonometry links its Polar and Cartesian representations:

The second important result is that any given point

an be rotated by an angle

These are the only two notions you need to understand this tutorial.

When it comes to 3D graphics, there’s an alternative representation that is often encountered. A rotation can, in fact, be expressed as a matrix multiplication. To do this, let’s express

as the column vector

. The problem is now finding a matrix 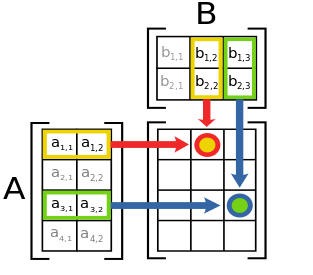 There are other operations which, unfortunately, cannot be achieved with this matrix. Translations is one of them. What we want is a new matrix

This is not possible with the current setting. In order to obtain this result, we need to modify the way

is now represented by the three dimensional column vector

. This is necessary in order to make the matrix multiplication works, since the new

now has three rows and columns.

This technique is currently being used in most 2D graphics framework. The matrix

is often called the Transformation matrix and can be used to perform the following operations: 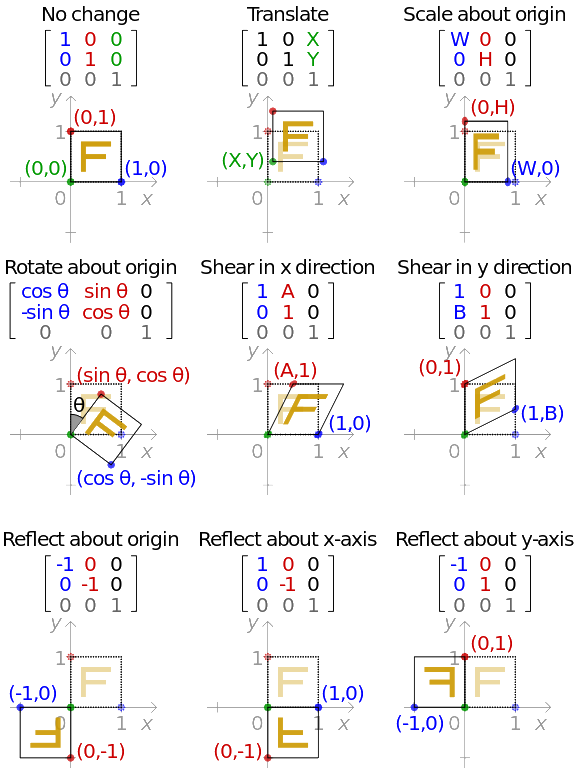 This is true because matrix multiplication is an associative operator. It is important to remember, however, that these transformations are not commutative. This means that

is not the same as

which does rotates or translates, there is a matrix

which performs the “opposite” operation. This means that if we apply

, we obtain the original point:

By using the associative property, we can get a glimpse of what this matrix is:

If you have a basic knowledge of matrix algebra, you should recognise this:

is the inverse matrix of

. Inverting a matrix is a non trivial task, and goes beyond the scope of this tutorial. However, you don’t really need to know how to invert a matrix to undo a transformation. Because of the way the transformation matrix has been constructed, it is always true that:

The meaning of these two equations should be intuitive to grasp: if you rotate a point of

angles, followed by a rotation of

, you get the original point. The same applies for translations.

From this, it follows that if you have a series of elementary rotations and translations, the inverse of their composition is the composition of their inverses, in reversed order:

component by zero destroys its information, which cannot be restored with another multiplication. Such transformation, however, is neither a rotation nor a translation. In this particular case, the matrix cannot be inverted. When this occurs, it is also referred as singular or degenerate. A matrix is singular is and only if its determinant is zero.

Rotation around a point

As seen in the previous part of this tutorial (A Gentle Primer on 2D Rotations), to rotate around an arbitrary point, we need to first make that our new origin of the Cartesian plane. Then we rotate the point, and finally we restore the origin of the plane. This can be expressed a composition of three transformations:

It’s important to remember that, despite the order in which they are written, the first transformation is the one on right.

The main advantage of the matrix notation is that transformations can be composed by multiplying their respective transformation matrices. This also allows to “undo” transformation by calculating the inverse of its matrix.

The next post in this series will focus on the geometrical consequences of the equations we have derived. This will help to demystify one of the most misunderstood concept of Maths: complex numbers. Their understanding is essential for quaternions.